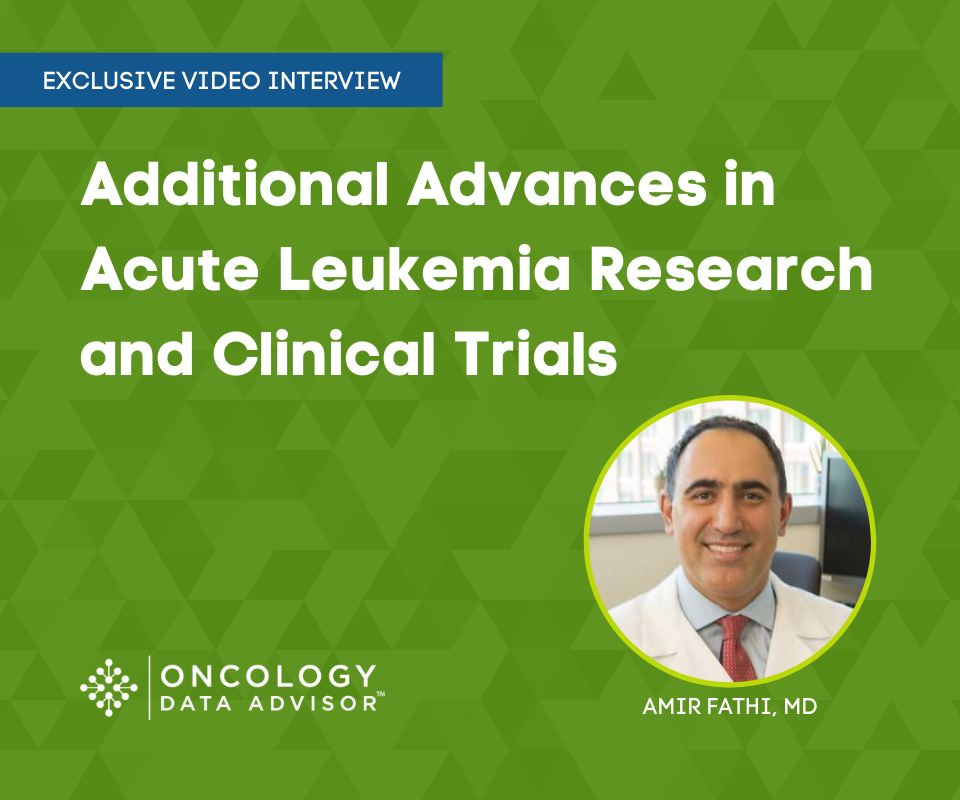 In January 2022, Dr. Amir Fathi, Associate Professor of Medicine at Harvard Medical School and Program Director of the Center for Leukemia at Massachusetts General Hospital, served as faculty for Therapy of B-Cell Acute Lymphoblastic Leukemia (ALL): an Evolving Landscape, a session presented during the ODACon Rare Hematologic Malignancies Symposium. Recently, numerous significant updates in both ALL and acute myeloid leukemia (AML) were presented at the 2022 American Society of Hematology (ASH) Annual Meeting in New Orleans. In this interview, Dr. Fathi elaborates on these exciting developments in the ever-changing treatment landscape for acute leukemia.

Oncology Data Advisor: Welcome to Oncology Data Advisor, I'm Keira Smith. Today I am joined by Dr. Amir Fathi, an Associate Professor of Medicine at Harvard Medical School. He is going to be sharing some of the significant updates in acute myeloid leukemia and acute lymphoblastic leukemia from the recent ASH Annual Meeting. Dr. Fathi, thanks so much for joining me today.

Amir Fathi, MD: Sure, my name is Amir Fathi. I'm an academic oncologist. I work at Massachusetts General Hospital. I direct the Leukemia Program here, and my main role is to work on and develop clinical trial investigation of novel therapies for acute leukemia.

Oncology Data Advisor: So, would you like to tell us about the abstracts that you presented at ASH recently?

Dr. Fathi: Sure. I think, overall, there were a lot of exciting presentations at ASH this year. There was some work that's been done mainly at MD Anderson on triplet combinations—venetoclax and hypomethylating agents (HMA), as well as isocitrate dehydrogenase (IDH) inhibitors, venetoclax and hypomethylating agents. Some other data with the three triplets was presented, which was exciting. Dr. Naval Daver is a good friend of mine, he's at MD Anderson. He presented data on a couple of antibody-based combinations, namely magrolimab and HMA combinations, as well as another antibody-drug conjugate targeting CD123, also in combination for AML. Some of that data is early, and some of it is more developed. I think it is exciting.

I think a lot of folks are looking at venetoclax, which is this novel targeted BCL2 inhibitor. BCL2 is an anti-apoptotic protein that's upregulated in a lot of cancers and is thought to really drive progression of AML, and inhibiting it should have therapeutic effect. Unfortunately, as a single agent, it's not that efficacious, but when you combine it with therapies, it seems to make everything better.

For example, in combination with hypomethylating agents, it has really improved the outcomes with therapy for older patients with AML, and azacitidine or decitabine plus venetoclax is now approved for those patients. A lot of folks are now combining venetoclax with all sorts of conventional regimens, whether it's low intensity or high intensity. There were a few abstracts at ASH looking at high-intensity traditional chemotherapy regimens and adding venetoclax to them. They seem to be promising.

My ongoing trial, which we presented as a trial in progress, really wanted to take a step back and actually compare just HMA and venetoclax, which is now approved in older patients because it is so therapeutically efficacious. It's comparing that to intensive therapy to see if it stands up and does as well in terms of response, because it is much more gentle and is typically outpatient. If we can now move away from intensive therapies into more outpatient, well-tolerated regimens for acute myeloid leukemia, I think it would be a welcome development.

This is a phase 2, randomized, head-to-head study of 7+3, which is traditional induction chemotherapy, versus azacitidine and venetoclax. There is a primary end point of event-free survival, but a ton of secondary end points, including quality of life, cost, time in the hospital, molecular residual disease, and post-transplant outcomes. I think it is an exciting study. We are about a third of the way in, and we hope to finish accrual over the course of the next year or two.

We were also involved in one of the menin inhibitor trials that was presented. This class of drug is also exciting because it seems to have a signal of efficacy in the molecularly-defined patient population, namely those AML patients with NPM1 mutations or KMT2A alterations. It's a subset of AML patients, but I think in that group it does lead to pretty impressive responses in some. That data is still early, but its impressiveness seems to be apparent, and a lot of people were excited about those two abstracts that were presented at ASH as well.

Oncology Data Advisor: What were some of the other significant data presented in both AML and ALL at ASH?

Dr. Fathi: I think the most exciting data that was presented was of the ECOG-ACRIN E1910 collaboration clinical trial that actually looked at incorporating blinatumomab into the upfront treatment of ALL. Patients were randomized regarding getting conventional therapy following upfront treatment or incorporating cycles of blinatumomab. Those individuals who received blinatumomab did really well. The randomization occurred after intensification. Folks received either two cycles of blinatumomab or just went on to receive traditional consolidation therapy for ALL, and there was an overall survival advantage among those who received blinatumomab.

There was also other data. Some data that I was impressed by in younger patients with T-cell ALL was looking at the incorporation of nelarabine for T-cell ALL, as opposed to B-cell ALL. It's approved for relapsed/refractory T-cell ALL. Folks are now trying to incorporate that into the upfront setting, and at least in a phase 2 single-arm study, they showed that it had pretty impressive survival data. I was impressed by those abstracts.

There were also some presentations looking at combinations with ponatinib in BCR-ABL–positive B-cell ALL. That too was very impressive. I think overall, it was a good meeting with a lot of important developments.

Oncology Data Advisor: Great, thanks so much for sharing all these exciting updates today.

Amir Fathi, MD, is an Associate Professor of Medicine at Harvard Medical School and the Program Director of the Center for Leukemia and Massachusetts General Hospital. He specializes in the treatment of patients with acute lymphocytic leukemia, acute myeloid leukemia, chronic myeloid leukemia, myelodysplastic syndromes, and myeloproliferative diseases. Dr. Fathi's research focuses of the development of novel treatments for acute leukemias, with particular interest in FLT3 inhibition, aurora kinase inhibition, and antibody-drug conjugates, and he currently serves as primary investigator of several clinical trials.

Discussing the Relevance of Urine Studies in Myeloma With Kelsey Natsuhara, MD