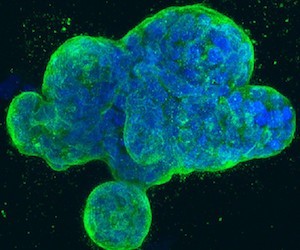 "Most patients with metastatic breast cancer have tumors that are HR-positive and are initially treated with endocrine therapy. Although endocrine therapy is an efficacious and well-tolerated therapy in most patients, resistance to endocrine therapy and subsequent disease progression remains a major challenge," write the researchers, led by first author George W. Sledge Jr, MD, Professor of Oncology at the Stanford University Medical Center.

A combination of endocrine therapy and cyclin-dependent kinase 4 and 6 (CDK4/6) inhibitors has become the standard of care for patients with HR-positive, HER2-negative advanced breast cancer. For those patients whose HR-positive, HER2-negative breast cancer is endocrine refractory, abemaciclib is FDA approved both as a monotherapy and also in combination with fulvestrant. The abemaciclib/fulvestrant approval was based on MONARCH 2's earlier results, in which it was found to improve progression-free survival (16.4 months vs 9.3 months for placebo/fulvestrant) and objective response rate for measurable disease (48.1% vs 21.3%). The current data, just published in JAMA Oncology and presented this week at the European Society for Medical Oncology (ESMO) Congress 2019, reveals MONARCH 2's results for overall survival at a prespecified interim of 338 overall survival events out of a planned final data cutoff at 441 events.

This phase 3 trial enrolled 669 women with HR-positive, HER2-negative advanced breast cancer that progressed during endocrine therapy. The trial population included pre-, peri-, and postmenopausal women, with those who were pre- or perimenopausal on ovarian suppression. Patients were randomized in a 2:1 ratio to receive fulvestrant in combination with either abemaciclib or placebo, with randomization stratified on site of metastasis (visceral, bone only, or other) and primary versus secondary resistance to prior endocrine therapy. The trial's primary end point was progression-free survival, with overall survival as a gated key secondary end point.

At this prespecified interim of 338 deaths, abemaciclib/fulvestrant produced a median overall survival of 46.7 months, compared with 37.3 months for fulvestrant alone. In addition, abemaciclib increased time to second disease progression (23.1 vs 20.6 months), time to chemotherapy (50.2 vs 22.1 months), and chemotherapy-free survival (25.5 vs 18.2 months). Although improvements in overall survival with abemaciclib were seen across all stratification factors, they were stronger in patients with visceral disease and primary resistance to prior endocrine therapy.

"MONARCH 2 demonstrated a statistically significant and clinically meaningful improvement in overall survival by 9.4 months for abemaciclib plus fulvestrant in patients with HR-positive, [HER2]-negative advanced breast cancer following progression on prior endocrine therapy. This overall survival benefit was consistent across subgroups," conclude Dr. Sledge and colleagues. "No new safety signals were observed, and abemaciclib plus fulvestrant significantly delayed the receipt of subsequent chemotherapy."