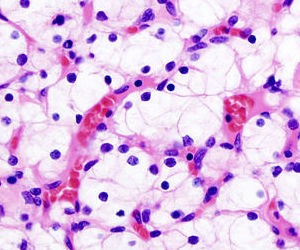 Sunitinib is an antiangiogenic drug, meaning that it prevents tumors from growing their own blood vessels. It is considered standard of care as a first-line therapy for patients with advanced RCC. However, many patients either have inherent resistance to antiangiogenic drugs or else continue to progress while on treatment.

Avelumab is an anti–programmed death ligand 1 (anti–PD-L1) antibody, which is a type of immune checkpoint inhibitor. Previously, anti–PD-L1 therapies have demonstrated acceptable safety and lasting antitumor activity as first- and second-line treatments for multiple tumor types, including advanced RCC.

The researchers hypothesized that combining an immune checkpoint inhibitor (such as avelumab) with a VEGF-targeted antiangiogenic therapy (such as axitinib) could provide enhanced tumor-fighting power as a result of the two drug classes' complementary mechanisms of action. Preliminary data from a single-group, nonrandomized phase 1b trial enrolling 55 patients with advanced RCC showed the promise of the avelumab/axitinib combination. The current trial showed its effectiveness in a much larger group.

"This [combination] is certainly better than sunitinib—hopefully this will lead to Food and Drug Administration approval soon," commented Toni K. Choueiri, MD, Director of the Lank Center for Genitourinary Oncology at Dana-Farber Cancer Institute and co-corresponding author of the study, which was published in The New England Journal of Medicine. "Interestingly, the analysis showed that all subgroups—good, intermediate, and poor-risk patient[s]—benefited from the combination treatment."

For the study (the JAVELIN Renal 101 trial, NCT02684006), 886 patients with previously untreated advanced RCC were randomly assigned in a 1:1 ratio to receive either avelumab 10 mg per kg of body weight intravenously every 2 weeks plus axitinib 5 mg orally twice daily, or sunitinib 50 mg orally once daily for 4 weeks of a 6-week cycle.

Dr. Choueiri emphasized the importance of avelumab/axitinib as a potential treatment for advanced RCC: "This is an important option. What we're doing in advanced kidney cancers is pushing the envelope. These treatments may not be curative, but patients are living longer, and the disease is becoming more chronic."