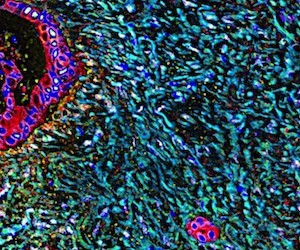 Pancreatic ductal adenocarcinoma (PDAC), which is for the most part resistant to chemotherapy and lacks effective treatments, is the fourth leading cause of cancer-related death worldwide. Researchers have now identified a potential therapeutic target in this deadly disease: antigen-presenting fibroblasts.

"We can't diagnose patients [with PDAC] early enough because we don't have tools, and they don't respond to drugs. One barrier to the drugs is the fibroblasts in the stroma," remarked Ela Elyada, PhD, a fellow in Dr. David Tuveson's lab at Cold Spring Harbor Laboratory and lead author of the study, which was published in Cancer Discovery. "We have a lot of fibroblast in pancreatic cancer, unlike other cancers, which are mostly cancer cells."

Cancer-associated fibroblasts (CAFs) are one of the most common types of cells in the stroma, the non-malignant connective tissue that surrounds a tumor and provides it with nutrients and protection. Fibroblasts play a major role in PDAC progression and drug resistance; however, eliminating CAFs entirely worsens cancers in mice. Seeking to solve this mystery, the researchers at Cold Spring Harbor Laboratory used single-cell RNA sequencing to characterize the content of the neoplastic and tumor microenvironment of PDAC tumors in both mice and humans.

The investigators classified the CAFs into three distinct subpopulations. They verified the presence of myofibroblastic CAFs (myCAFs) and inflammatory CAFs (iCAFs), both of which had previously been identified, and defined their unique genetic signatures. In addition, they identified a new type of CAFs, which they have named "antigen-presenting CAFs" (apCAFs). These CAFs express MHC class II genes—usually expressed only by specialized immune cells that can present antigens to helper T cells—and CD74; however, the apCAFs do not express classical co-stimulatory molecules that activate T cells. The apCAFs activate CD4-positive T cells in a fashion specific to antigens.

"We showed that apCAFs have specific capabilities of interacting with T cells in a way that other CAFs don't," commented Dr. Elyada. "If we can show that the apCAFs are somehow inhibiting the activity of T-cells, we can come up with therapies that specifically target that type of CAFs. We can also combine [these therapies] with other, complementary immune therapies to make them more effective."