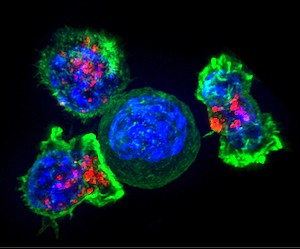 A form of immunotherapy, CAR T-cell therapy involves adding a CAR to the patient's cytotoxic T cells, transforming the T cells into CAR T cells. After this modification, which is done in the laboratory, the CAR T cells are reinjected into the patient's bloodstream, where they multiply and attack cancer cells throughout the body. Types of CAR T-cell therapy are currently FDA approved for aggressive, refractory non-Hodgkin lymphoma and for patients up to the age of 25 with relapsed/refractory acute lymphoblastic leukemia. Treatments involving CAR T cells are also being investigated for various other types of blood cancer, including multiple myeloma.

The bb2121 infusion targets BCMA, a transmembrane glycoprotein in the tumor necrosis factor receptor superfamily 17 (TNFRSF17) that is present at significantly increased levels in all multiple myeloma cells, yet it is not present in high levels in healthy tissues, with the exception of normal plasma cells.

The study of bb2121 in relapsed/refractory multiple myeloma, published in the New England Journal of Medicine, reports results for the first 33 consecutive patients to receive bb2121 infusion. All patients had received at least three prior lines of therapy, including an immunomodulatory agent and a proteasome inhibitor, unless they were refractory to both drug classes. The study's primary end point was safety. Bb2121 was given as a single infusion at doses of 50x106, 150x106, 450x106, or 800x106 CAR-positive T cells during the study's dose-escalation phase and at doses of 150x106 to 450x106 CAR-positive T cells during the expansion phase.

The most frequent grade 3 or higher adverse events were hematologic toxicities, including neutropenia (85%), leukopenia (58%), anemia (45%), and thrombocytopenia (45%). Cytokine release syndrome occurred in 76% of patients, primarily of grade 1 or 2 (70% of patients), with only two patients (6%) experiencing a grade 3 reaction. Fourteen patients (42%) experienced neurologic toxicities, all of which were grade 1 or 2, except for a reversible grade 4 neurologic toxic effect in one patient (3%).

Bb2121 produced an objective response rate of 85%, including complete responses in 45% of patients. Expansion of CAR T cells was associated with response. Of the 15 complete responders, six had experienced a relapse as of the time of the data-cutoff date, which was 6.2 months after the last infusion date. The median progression-free survival on bb2121 was 11.8 months. All 16 patients who experienced at least a partial response and could be evaluated for minimal residual disease (MRD) had MRD-negative status. CAR T cells persisted up to one year after the infusion.

"We are encouraged by the expansion and persistence of the CAR T-cells, as well as the deep and durable responses with a manageable safety profile we've seen for bb2121 to date," said the trial's principal investigator, James Kochenderfer, MD, of the National Cancer Institute Center for Cancer Research.