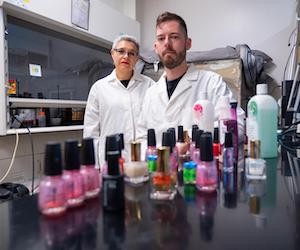 When Aaron Lamplugh, PhD candidate at University of Colorado Boulder, and colleagues measured the levels of chemicals in six nail salons across Colorado, they discovered that nail salon technicians are exposed to many volatile organic compounds (VOCs) at levels that increase their risk of developing cancer. In this interview with i3 Health, Mr. Lamplugh shares insights regarding the implications that high levels of chemicals have on nail salon workers and suggests some ways to mitigate the effects of VOCs in the workplace.

What led you to pursue research on environmental pollution and its adverse effects on health?

Aaron Lamplugh: I've always had a bit of an interest in environmental issues. I'm originally from Alabama, where there are a lot of environmental issues stemming from heavy industry, energy, oil, and gas operations. What I observed is that these environmental problems had a tendency to impact marginalized communities, whether that was the very poor or communities of color, so I became very focused on environmental justice. I eventually went back to school to get my PhD in air quality, which is how I ended up in Boulder working on the nail salon project.

Our research group at CU works almost exclusively with underserved communities, many of which are here in the US. As it turns out, over 75% of workers in the US nail industry are from minority groups, and many are immigrants, so it wasn't much of a stretch for us to get involved. My advisor, Dr. Lupita Montoya, first had the idea to investigate this issue years ago, while she was in a salon run by members of the Latino community. She actually had some issues getting the project off the ground because most US nail salons are run by members of the Vietnamese community, and we didn't have any sort of connection to this group. Eventually, our research team came to include members of the Vietnamese community, and at that point we decided to finally attempt the study since we could engage with the target community.

What are some of the health issues that nail salon workers experience due to their place of employment?

Mr. Lamplugh: A lot of the symptoms commonly reported by nail salon workers in our study were things like headaches, eye irritation, skin irritation, and nose irritation. We don't normally think of these as major health risks, but they can be a pretty serious problem if they're part of your daily work experience.

We also measured relatively high levels of some carcinogens, which could eventually lead to cancer if workers spend enough time exposed to them. We can't actually say that cancer is something nail salon workers are currently "experiencing," because no one has done a real longitudinal health study on people working in this industry. It would be very interesting to see how the estimates we made compare with actual cancer rates for this occupation.

Are nail salon customers at risk for these health issues?

Mr. Lamplugh: There is likely very little risk to nail salon customers from the compounds that we measured. There's a significant time element to exposure, and someone who spends less than an hour in a nail salon once a month or even once a week isn't really getting a significant exposure to the pollutants that we observe in salons.

That being said, there have been reports of certain individuals with allergies having adverse reactions to some nail product ingredients, and nail salons probably aren't an extremely healthy environment for people with asthma or women who are pregnant.

What can nail salon workers do to avoid the risk of developing cancer from exposure to VOCs?

Mr. Lamplugh: Cancer risk is typically based on exposure to pollutants, and you can reduce your risk by either spending less time in a polluted environment or reducing levels of pollution in your workplace. One thing we always tell salon owners is to keep their thermostat fan setting in the "on" position, rather than "auto," because it ensures constant ventilation throughout the day. Workers taking their breaks outside of the salon is also a good thing. We advocate for everyone to utilize proper personal protective equipment like gloves and masks, although the gloves should really be nitrile and the masks need to have an activated carbon filter; the surgical style masks that we commonly see just don't work.

There's still some question as to whether certain brands of nail products that advertise themselves as healthier alternatives are actually being honest. There was a past study by the California Environmental Protection Agency (EPA) suggesting that some of these claims are false. This is really an issue of the US FDA not doing a thorough enough job of vetting cosmetics before they go to market, but that's an entire story in itself.

What are steps that can be taken to reduce or eliminate VOCs in nail salons?

Mr. Lamplugh: As I mentioned before, ventilation is very important for reducing VOC levels in salons. Having a working, operational ventilation system installed is step number one. We're currently working on some new technologies involving passive diffusive VOC sinks, but they're still very much in the design phase. There are also downdraft table vents and local exhaust vents that can be added near salon tables to capture VOCs emitted at the source. Some states and localities actually require these for new and existing salons. Again, I think that anyone hoping to utilize new products should proceed with caution, since many have not been thoroughly vetted by an independent scientific or regulatory body.

Mr. Lamplugh: There are some good community-based models for healthy nail salons currently in place. We've gotten to know some of the folks over at the California Healthy Nail Salon Collaborative. They're doing really great work on the ground, pushing for new policy as well as healthy workplace conditions.

There are also several published guides for healthy practices in nail salons, although we noted in our study that few nail salon workers or owners had ever heard of them:

Stay Healthy and Safe While Giving Manicures and Pedicures: A Guide for Nail Salon Workers

Aaron Lamplugh is currently a PhD candidate in mechanical engineering, specializing in occupational exposure to gas-phase pollutants, at the University of Colorado Boulder.

HPV+ Without CIN: Still at Risk for Cervical Cancer