Changing the Standard of Care for Pediatric Neuroblastoma With Wendy London, PhD 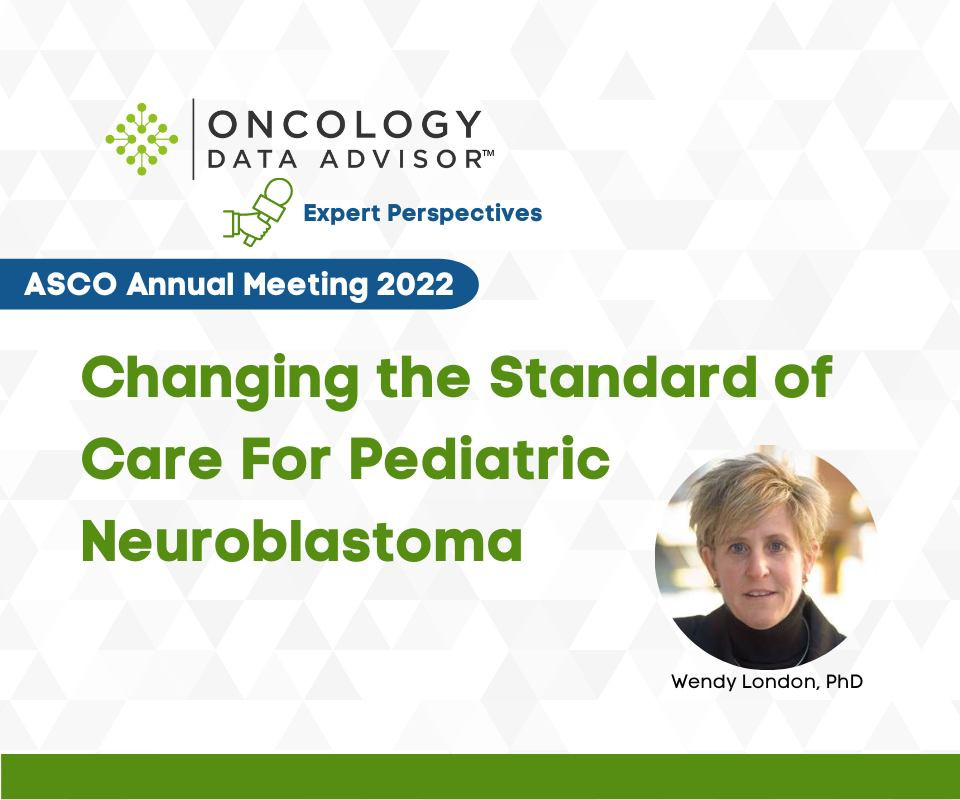 At the recent American Society of Clinical Oncology (ASCO) Annual Meeting, Dr. Wendy London, Associate Professor of Pediatrics at Harvard Medical School, sat down with Oncology Data Advisor to share her research regarding risk stratification, reduction of therapy, and survival outcomes for pediatric patients with neuroblastoma.

This podcast episode was recorded live at the 2022 ASCO Annual Meeting in Chicago by Oncology Data Advisor and ConveyMed.

Wendy London, PhD: Yes, I'd be happy to. Thank you very much for inviting me to come in and talk to you today. I am an Associate Professor of Pediatrics at Harvard Medical School, and I began working in children's cancer research in 1998. I'm a biostatistician by training, and my independent research has been in risk factors for neuroblastoma and applying them to stratification for treatment intensity.

When we make changes to risk stratification, we are in fact changing the standard of care for these children. . .Even though it's not a new drug, we're still changing the amount and the intensity of treatment that these children receive, and we have to perform analyses to validate the outcome after the change was made. It's just as important to do that as it would be in a clinical trial to test a new drug."

In 2005, I published a paper in the Journal of Clinical Oncology. In this paper, we showed that there's a relationship between age and outcome for children with neuroblastoma. As age gradually increases, outcome gradually worsens. In fact, we used a cutoff of 12 months to discriminate younger patients who have better outcomes from older patients with worse outcomes. My research indicated that a higher age cutoff might better serve our clinical purposes, and we identified 19 months as the optimal cutoff.

From a clinical perspective, we decided to use 18 months in the Children's Oncology Group study. We decided to change the age cutoff from 12 months to 18 months and applied it to change the risk group stratification for a group of toddlers. Children who were either stage III or IV, who were between the age of 12 and 18 months, whose MYCN was not amplified, who were stage III with unfavorable International Neuroblastoma Pathology Classification (INPC), or who were stage IV with favorable INPC, were moved from high-risk intensive therapy to intermediate risk. They received only two to eight cycles of therapy.

I designed a retrospective study to determine the effects of this change in cutoff. The cutoff change was applied in 2006, and in the 15 years, we have seen 105 patients who had a reduction in therapy as a result of the change in the age cutoff and the move from the high-risk to intermediate-risk group. Our objective was to determine if this was the right thing to do. Did the toddlers maintain excellent outcomes despite the fact that they had a reduction of therapy?

Our research showed that the Kaplan-Meier curves of outcome had a cure plateau of about 88% for patients prior to 2006, as well as after 2006. For overall survival, the cure plateau was about 90%. We also did a comparison taking patients from before 2006, the toddlers, and looking at their outcomes compared with other patients who were treated with high-risk therapy. In fact, this formed the basis for my recommendation to change the outcome. The toddlers treated with high-risk therapy prior to 2006 had outcomes of 90%, whereas the other high-risk patients had outcomes less than 40%.

Now, after 2006, when we moved these children from high-risk therapy to intermediate-risk therapy and we compared them to the other intermediate-risk patients, they all had very similar outcomes at about 85% to 90%. We were very pleased to see that our decision to change the risk stratification had been validated. It was the right thing to do for these children. As a result, they were likely spared the acute toxicity and late effects known to be associated with high-risk therapy.

Another point that's more general is that when we make changes to risk stratification, we are in fact changing the standard of care for these children. It's just as important to validate this change in standard of care. Even though it's not a new drug, we're still changing the amount and the intensity of treatment that these children receive, and we have to perform analyses to validate the outcome after the change was made. It's just as important to do that as it would be in a clinical trial to test a new drug.

Oncology Data Advisor: I think you said this at the beginning, but what biomarkers currently exist?

Dr. London: The biomarkers used in neuroblastoma for risk stratification are age, stage of disease, and now we're using the International Neuroblastoma Risk Group Staging System (INSS). We also make use of MYCN amplified, not amplified, ploidy, diploid, or hyperdiploid, as well as International Neuroblastoma Pathology Classification (INPC), favorable or unfavorable. In some patients we use 1p loss of heterozygosity or 1q loss. We also sometimes use whether or not a child is symptomatic—compression of a spinal cord would be an example—and the degree of resection of the original surgery to determine how much therapy may be required.

Oncology Data Advisor: Oh, wow. Well, that's really interesting that the research that you have done has now changed the standard of care.

Dr. London: It's really exciting for me, especially as a biostatistician, as I don't ever directly interact with the patients. But I'm pleased to know that this change has been able to improve the outcome for these children.

Oncology Data Advisor: That's great. Congratulations. Thanks so much for talking to us.

Dr. London: Thank you very much. It's been a pleasure.

Thank you for listening to this podcast recorded live at the 2022 ASCO Annual Meeting by Oncology Data Advisor and ConveyMed. For more expert perspectives on the latest in cancer research and treatment, be sure to subscribe to the podcast at conveymed.io and oncdata.com. Don't forget to follow us on social media for news, exclusive interviews, and more.

Wendy B. London, PhD, is an Associate Professor of Pediatrics at Harvard Medical School and the Director of Biostatistics, Medicine, at Boston Children's Hospital. She is also the Director of the Clinical Translational Investigation Program in Pediatric Hematology/Oncology and the Faculty Director of Survey and Qualitative Management Core at Dana-Farber Cancer Institute. Dr. London's primary research interests are neuroblastoma, prognostic stratification, and design of clinical trials. Her research regarding the impact of age on neuroblastoma outcome resulted in a reduction of therapy for patients between 12 and 18 months old. In addition, she serves as chair of the Statistics Committee in consensus with the International Neuroblastoma Risk Group (INRG), for which she and her committee assembled the largest neuroblastoma database in the world. Through this project, Dr. London and her team eliminated the redundancy of histopathologic classification and age in risk stratification for neuroblastoma.