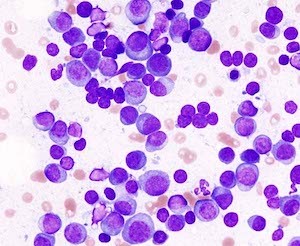 The FDA has now approved daratumumab (Darzalex®, Janssen) to be used in combination with bortezomib, thalidomide, and dexamethasone (VTd) in adult patients with newly diagnosed multiple myeloma who are eligible for an autologous stem cell transplant.

Approval was based on the results from the open-label, randomized, active-controlled phase 3 trial, CASSIOPEIA (NCT02541383). In this study, published in The Lancet, 1,085 patients with newly diagnosed multiple myeloma who were transplant-eligible were enrolled. The participants were randomized in a 1:1 ratio to receive either four pre-transplant induction and two post-transplant consolidation cycles of VTd alone or in combination with daratumumab (D-VTd).

At day 100 after patients received a transplantation, a stringent complete response was observed in 29% of the patients in the D-VTd group compared with 20% of patients in the VTd group. For patients who received D-VTd, 39% of them achieved a complete response compared with 26% in the VTd group. In addition, the D-VTd regimen was associated with an improved rate of minimal residual disease-negativity compared with the VTd alone regimen (64% vs 44%). However, median progression-free survival from first randomization was not reached in either group.