Depression and Suicide Risk in Oncologists: Daniel C. McFarland, DO 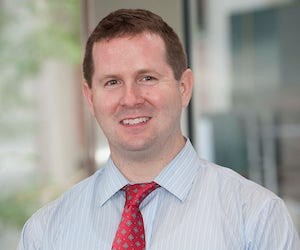 ​Physicians have the highest suicide rate of any profession, and oncologists experience depression at a higher rate than physicians in other internal medicine specialties. In this interview with i3 Health, Daniel C. McFarland, DO, a medical oncologist and psychiatrist at Memorial Sloan Kettering Cancer Center in New York City, discusses the factors contributing to this issue, which he and colleagues addressed in a recent publication of the American Society of Clinical Oncology (ASCO) and about which he presented at this year's ASCO Annual Meeting. He also shares advice regarding what oncologists and other professionals involved in cancer care can do if they or their colleagues are experiencing depression or suicidal thoughts.

What are the factors contributing to the high rates of depression and suicide among physicians in general and among oncologists in particular?

Daniel C. McFarland, DO: We know that depression and suicide have always been there. They have actually been described for many centuries, with particularly clear accounts in the nineteenth and early twentieth centuries.

We don't have the complete picture of what contributes to depression and suicide in physicians, but the stigma around mental health issues is greater for physicians than it is for the general population. In a sense, there is kind of a double stigma for doctors and other health care clinicians. First, there's just the regular stigma around admitting that there's a problem, and then for clinicians, being in the role of providing care for patients complicates coming to terms with that issue. The culture of stoicism contributes. Essentially, not talking about or addressing depression is probably the biggest factor.

There are data that show that doctors and other health care clinicians, such as advanced practice providers, get worse medical care and certainly worse mental health care for a multitude of reasons. There's very interesting literature about what happens when a doctor sees another doctor. Shortcuts are taken in which the doctor providing care says to him- or herself, "Oh, I don't want to ask my doctor patient about that. They would surely understand X or Y..." These shortcuts can end badly.

The other aspect of this issue is that doctors are notorious for not going to see doctors. When you look at the rates of suicide among physicians, they're much less likely to have been prescribed an antidepressant versus the general population. On the other hand, they're much more likely to have been taking a sleeping pill or some sort of narcotic, something to numb the pain rather than to treat the underlying issue of depression, which is associated with the majority of suicides.

The really interesting thing about oncologists is that rates of depression are actually higher than those of other internal medicine subspecialties, but the job satisfaction is actually higher as well. What that difference speaks to, at least in my mind, is that we're working with patients at a very vulnerable time in their lives, so there's a lot of stress inoculation that happens. The oncologist feels the stress of the patient and the family member every single day and in every single patient exam room. That repetitiveness can lead to what they call secondary trauma or compassion fatigue.

That is a unique aspect of oncology, but I think it's also an enormous privilege to be able to work with patients at what is for them such a vulnerable time. The patients let oncologists know the important role that their doctors are playing in their lives. Oncologists feel like they're doing something good and important, so it's rewarding in that sense.

What can hospitals and cancer clinics do to help alleviate feelings of depression among oncologists, oncology nurses, and other employees working with patients with cancer?

Dr. McFarland: One thing that institutions can do is to provide a direct, confidential telephone line on which professionals can discuss what they're feeling and receive professional mental health services for crisis situations. Of course, there are suicide hotline numbers out there, but what we deal with in medicine is so specific to medicine that the help needs to be specific.

In addition, there are a multitude of community-enriching activities and services that enhance camaraderie. A specific psychological theory of suicide among physicians highlights thwarted sense of belonging as a reason why physicians end their lives, so although these kinds of events and functions seem trivial, they really play an important role for the mental health of physicians. I imagine that such efforts can be difficult for hospital systems that are undergoing major changes, such as mergers, but enhancing solidarity and creating community is very important in this stressful line of work.

It's interesting; there's a whole initiative among hospitals to do more thorough suicide screenings for patients. There's something called the Columbia Suicide Severity Rating Scale being rolled out at many different hospitals, and it actually allows people without any medical background to ask the key questions about suicide. I hope we're entering into a culture where talking about it will be less stigmatized. I think the stigma's always going to be there to some extent; that's just a hurdle that we have to get over.

I think the way that I would approach this issue is coming from the perspective of one's role as a doctor, whose primary priority is to take good care of his or her patients. I may come from it from that angle: if a doctor is feeling a certain way, patient care may be compromised, so he or she needs to be encouraged to take care of the personal issue at hand.

The airline industry actually does this really well from what I saw at the ASCO Annual Meeting. There was a great presentation with someone from United Airlines, and it was just very refreshing to hear the way that this person said that if a pilot is experiencing a personal crisis of any sort, he or she is empowered to say, "Hey, I need a time out," or "I need to take care of this." I think that we should be empowered to do that as well.

Let's empower doctors to take their own time out, to talk to a professional. Maybe the way to do it is by creating this culture where it's basically viewed as being for the good of the patients; it's good for our medical practice. Obviously, depression is a very personal issue, but what the airline industry has done is take out that blame and make it about getting passengers from A to B. That's exactly what it is for us, too.

What advice do you have for oncologists, oncology nurses, and other professionals in cancer care who may be experiencing depression or suicidal thoughts?

Obviously, talking to a friend is better than not talking to anyone at all, but I think that we tend to do that as doctors, to just talk to a colleague. This is not that sort of thing. It's not like asking for an antibiotic for an upper respiratory infection. You need to talk to a professional and not be ashamed or embarrassed to do that.

What advice can you offer anyone who is concerned about a colleague or friend experiencing depression or suicidal thoughts?

Dr. McFarland: While peer support is really important, I also think that these issues need to be handled on a professional level. I would say to that person to not take it upon themselves—they should feel empowered to speak to their colleague who's experiencing some kind of emotional issue, but they should also feel empowered to speak to someone in a leadership position to let them know of the concern. Obviously, this depends on the severity of the issue.

Is there anything else that you want to add?

Dr. McFarland: I think it's really encouraging that we are focusing on this topic more and more. It's an evolving field. We need to look at other fields that have done this better, like the airline industry. We need to take the blame off of the individual and find ways to foster a sense of community in our institutions.

Dr. McFarland is a medical oncologist and psychiatrist at Memorial Sloan Kettering Cancer Center. He completed a combined residency program in internal medicine and psychiatry at Rush University Medical Center in Chicago followed by a fellowship in medical oncology/hematology at the Icahn School of Medicine at Mount Sinai in New York City.