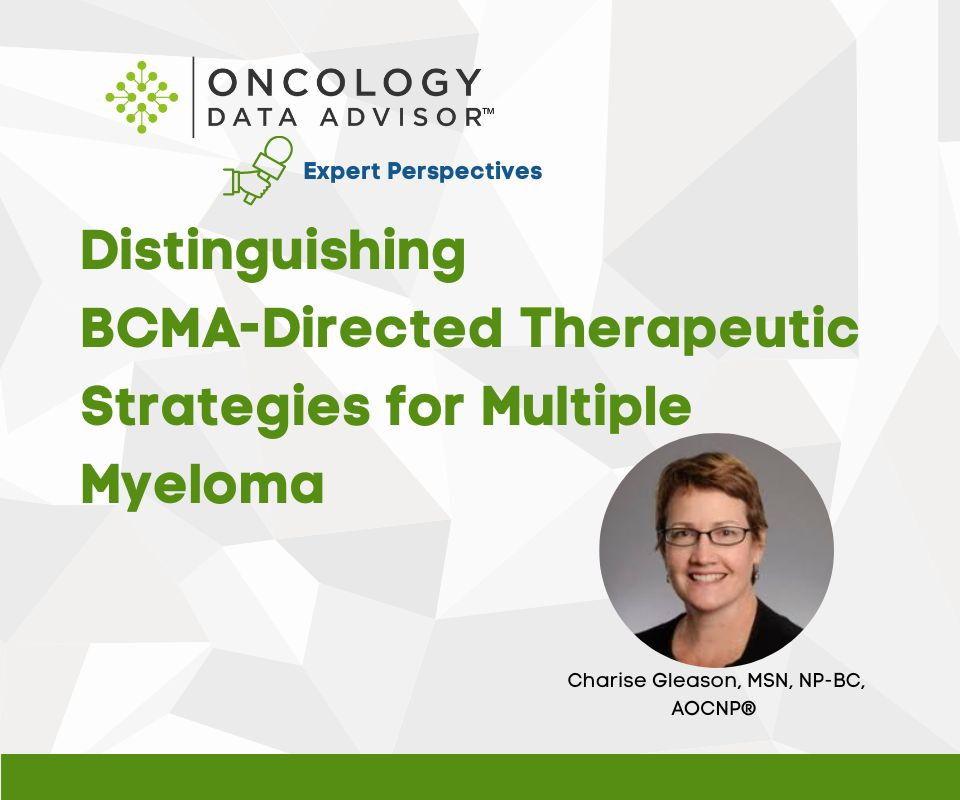 Oncology Data Advisor: Thank you for joining us, Dr. Gleason. To start off, what are the current BCMA-directed therapeutic approaches in multiple myeloma?

Charise Gleason, MSN, NP-BC, AOCNP®: Right now, we have antibody-drug conjugates, the first approval of which was for belantamab mafodotin. We've got CAR T-cell therapies, two of which are FDA approved: idecabtagene vicleucel and ciltacabtagene autoleucel. Then there are bispecific antibodies, which are currently being used in clinical trials, and we think one of them may be getting close to approval. Those are the current BCMA-directed therapeutic approaches for myeloma.

Talking about the antibody-drug conjugates first, belantamab mafotodin is the one that's FDA-approved. It's an intravenous (IV) drug that's given every three weeks, and it's pretty well tolerated. There are three components to it. You've got a BCMA-recognized monoclonal antibody, you've got a cytotoxic payload, and then you've got a chemical linker. When they come together, the chemical linker gets hydrolyzed, which basically allows that cytotoxic payload to go into the cell and cause apoptosis. Like I said, it's very well tolerated for patients.

Then you have your CAR Ts. People think of those as kind of "one and done," but it's quite a process to get a patient through CAR T. You've got to identify the patient, and you've got to screen them. They have to be at a place where their disease isn't rapidly taking off. You have time to leukapherese them and then decide whether they're getting bridging chemotherapy or not. Their T cells are what you're collecting. They're then sent off to be re-engineered to have a chimeric antigen receptor attached, and that's what recognizes the cell. When those are given back to a patient, they get T-cell depletion chemotherapy just to make room for these new CAR Ts. They recognize these re-engineered cells and then attack the BCMA that's on those plasma cells.

That's typically a maneuver done in the hospital, so it's quite a process to get patients through this. There's also a washout period of no treatment for two weeks prior to getting the leukapheresis. Then two weeks prior to getting their T cells, they have to be off therapy during that time, as well. This can only be done at a center that is approved and has a Risk Evaluation Mitigation Strategy (REMS) program, so it's typically done at academic centers. Right now, it's pretty much after four lines of therapy for the two that are FDA approved. We've got more CAR T cells being used in clinical trials, and they're moving them closer—not quite upfront, but closer, without so many lines of therapy. Then some of the latest trials are coming behind and adding maintenance to it, so there's more to come on that.

Then you've got your bispecific antibodies. These are what we're using in clinical trials. Bispecific antibodies engage BCMA on the plasma cell and then CD3 on the T cell. Basically, it brings them to close proximity, so you can induce tumor cell lysis that way. These are given as a ramp-up dose in the hospital because you can have some of the same side effects as CAR T. Then patients go home, and after the first several doses, they receive it in the outpatient setting.

So, those the current BCMA-directed therapeutic approaches that we're looking at in myeloma right now.

Oncology Data Advisor: Thank you so much for explaining all of this. It really helps in understanding all the different therapies and how they work. So, what are some of the key considerations in terms of side effects for patients receiving these agents?

Ms. Gleason: With all BCMAs—but particularly with belantamab mafodotin—as you think about cytopenias, you think about ocular issues. You can have keratopathy that causes blurry vision, vision changes, and dry eyes. Patients with dry eyes need to be using eye lubricant at least four times a day, and the company does provide that. If a patient can't get it for themselves, there is a way to get it through the company. The other thing is that patients have to have a baseline eye exam, and then they have to have an eye exam prior to every dosing. It's dosed every three weeks. Some patients may not get dosed every three weeks; they may go every six weeks depending on their eye symptoms, because they do have to resolve back to a grade one prior to being dosed. Otherwise, belantamab mafodotin is generally well tolerated, and the vision changes do resolve off-treatment.

As far as CAR T,you think about neurotoxicities and cytokine release syndrome. I like to tell patients, "This is like the worst flu that you ever got." They can have fevers or confusion, so they're really monitored closely in the hospital. For community nurses, there's just the awareness that neurotoxicities can last for up to eight weeks, and that's why patients aren't allowed to drive for that time. These can be really subtle changes, so patients just need to be monitored closely. They need to have a care partner with them, and they need to stay in the area for typically 30 days post–CAR T if they're from a different area.

You also think about infection issues. They can have hypogammaglobulinemia, so it's pretty typical to give these patients monthly intravenous immunoglobulin (IVIG) and really watch their counts closely. They can have some delayed cytopenias as well, especially thrombocytopenia. Just because this is a treatment that's approved as a fourth-line therapy, they've already had a lot of treatment, so sometimes those platelets can be a little bit slow to recover. Those are the main things—the neurotoxicities and the cytokine release syndrome—but otherwise, typically, you can see a big response early on. These toxicities, for the most part, are managed on the inpatient side, but then you still need to monitor for them when those patients are discharged.

Oncology Data Advisor: Thanks for this great overview. It's so helpful to hear about management strategies for these new treatments.

Charise Gleason, MSN, NP-BC, AOCNP®, is the Advanced Practice Provider Chief and a nurse practitioner in the Bone Marrow and Stem Cell Transplant Center at Emory University Winship Cancer Institute. She specializes in the treatment and management of patients with multiple myeloma, and she oversees the development of oncology advanced practice guidelines for Emory Healthcare.