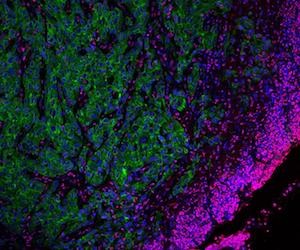 A new study suggests that epigenetic cancer treatments may do more harm than good.

Epigenetic treatments impact epigenetic modifiers, genes which modify the epigenome—the collection of chemical compounds controlling genetic expression—by causing DNA methylation, altering chromatin structure, or modifying post-translational chromatin. Because tumors frequently have epigenetic modifiers that are mutated or altered in their expression, these genes have become a focus of cancer research. But what is the long-term effect of treatments targeting epigenetic modifiers? The answer to that question has been unclear—until now.

For their study, published in Nature Cell Biology, a team headed by researchers at the Institute for Research in Biomedicine (IRB) Barcelona explored the effects of epigenetic treatment by deleting G9a, a histone methyltransferase enzyme whose overexpression in different types of cancer has been linked to poor prognosis. When the investigators depleted G9a in squamous tumors that had been induced in rodent epidermis, they found that these tumors developed after a longer latency period than did wild-type tumors.

"This finding would make you think that epigenetic factors are good therapeutic targets. But the genomic instability that occurred also brought about the appearance of mutated tumor cells, which eventually developed highly aggressive tumors," commented the study's lead author, Alexandra Avgustinova, PhD, a postdoctoral fellow at IRB Barcelona.

In addition, the G9a-depleted tumor cells displayed an expanded variety of cancer progenitors and an increase in dysfunctional mutations of p53, an important tumor suppressor gene. Furthermore, depleting G9a did not alter the quantity of single nucleotide variants or the overall genomic distribution.

In their study, the researchers "call for caution when assessing long-term therapeutic benefits of chromatin modifier inhibitors, which may promote more aggressive disease."

"We are not saying that this is going to happen in every case," explained the study's senior author, Salvador Aznar Benitah, PhD, Group Leader of the Stem Cell and Cancer Laboratory at IRB Barcelona, "but it is something that needs to be studied in greater depth before deciding whether drugs targeting epigenetic factors should be used in clinical practice or not."