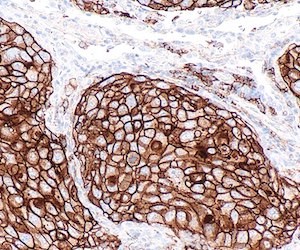 Previously, pembrolizumab (Keytruda®, Merck Inc.) was approved as a single agent for first-line treatment of patients with metastatic non-small cell lung cancer (NSCLC) whose tumors express PD-L1 with a tumor proportion score (TPS)  greater than or equal to 50%. The FDA has now expanded approval for first-line pembrolizumab to include patients with stage III NSCLC who do not qualify for surgical resection or definitive chemoradiation or metastatic NSCLC. For patients to qualify for treatment, tumors must have no EGFR or ALK genomic aberrations and must express programmed cell death ligand 1 (PD-L1) with a TPS greater than or equal to 1% according to an FDA-approved test.

Approval was granted based on the KEYNOTE-042 trial (NCT02220894), a randomized, multicenter, open-label, active-controlled study. The study population consisted of 1,274 patients with stage III or IV NSCLC who had not received systemic treatment for metastatic NSCLC and whose tumors expressed PD-L1 (TPS greater than or equal to 1%). An immunohistochemistry assay was used to determine PD-L1 expression.

Based on patients' Eastern Cooperative Oncology Group performance status, histology, geographic region, and PD-L1 expression (TPS greater than or equal to 50% vs TPS 1% to 49%), patients were randomized in a one-to-one ratio to receive either 200 mg of single-agent pembrolizumab intravenously every three weeks or an intravenous carboplatin-containing regimen with either pemetrexed or paclitaxel for four to six 21-day cycles.

"The KEYNOTE-042 trial demonstrated a survival benefit with [pembrolizumab] monotherapy across histologies in certain patients with stage III or metastatic non–small cell lung cancer whose tumors expressed PD-L1 in at least 1% of tumor cells," stated Gilberto Lopes, MD, Associate Director for Global Oncology at the Sylvester Comprehensive Cancer Center at the University of Miami. "As a practicing oncologist, having additional options available for patients is important in the rapidly evolving treatment landscape for lung cancer, which remains the leading cause of cancer death in the United States."