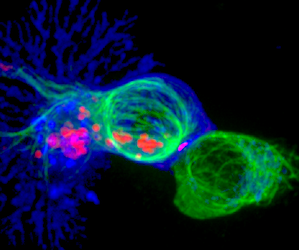 Researchers have identified subtypes of T cells occurring within the follicular lymphoma (FL) microenvironment that have differing impacts on patients' chances of survival.

With a median five-year survival of 74% for patients with FL treated with chemoimmunotherapy, this form of treatment has substantially improved outcomes. For a subset of patients who experience early disease progression, however, survival rates remain very low.

Part of the reason for the poor outcome among these patients is an impaired immune response to malignant lymphoma cells. The immune system's T cells are essential to antitumor immunity. Increased overall numbers of T cells within the tumor correlates with a favorable outcome in FL. However, the prognostic significance of intratumoral T cells is far from certain: different subsets of T cells correlate either positively or negatively with patient outcome.

Dr. Yang expressed his hope that these results will one day be of use in clinical settings: "If we can implement a strategy to restore the expression of costimulatory receptors in patients with this subpopulation of T cells, we may be able to develop a new therapy for some patients with follicular lymphoma."

Continued Induction, Maintenance, or Observation: Which Is Most Effective for Metastatic Colorectal Cancer?