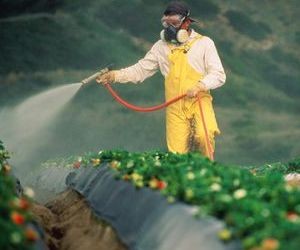 Researchers report that glyphosate, the herbicide commonly found in Roundup® (Monsanto Technology, LLC), which is used as a pesticide on produce, significantly increases the risk of developing non-Hodgkin lymphoma (NHL) in humans.

"Our analysis focused on providing the best possible answer to the question of whether or not glyphosate is carcinogenic," remarked the senior author of the paper, Lianne Sheppard, PhD, Professor of Environmental and Occupational Health Sciences and Biostatistics at the University of Washington. "As a result of this research, I am even more convinced that it is."

Using 2018 information derived from the Agricultural Health Study (AHS), a study funded by the National Cancer Institute and the National Institute of Environmental Health Sciences that analyzes cancer and health outcomes of pesticide applicators and their spouses, on the most highly glyphosate-exposed individuals in conjunction with five case-control studies, the researchers conducted a comprehensive meta-analysis and found that glyphosate-exposed individuals are at a 41% increased risk for developing NHL. The researchers published these findings in Mutation Research.

"This research provides the most up-to-date analysis of glyphosate and its link with non-Hodgkin lymphoma, incorporating a 2018 study of more than 54,000 people who work as licensed pesticide applicators," stated co-author Rachel Shaffer, a PhD student in the Department of Environmental and Occupational Health Sciences at the University of Washington.

In order to contextualize their findings, the researchers then reviewed animal and mechanistic studies. They found that mice treated with pure glyphosate developed malignant lymphoma and exhibited immunosuppression, endocrine disruption, and genetic alterations typically seen in patients with NHL.

Ms. Shaffer commented on additional support for the study: "These findings are aligned with a prior assessment from the International Agency for Research on Cancer, which classified glyphosate as a 'probable human carcinogen' in 2015."

Overall, the overwhelming evidence demonstrates a strong association between glyphosate-based herbicides and NHL. To reduce this risk, it is imperative that individuals begin using safer herbicide substitutes.

To Fight Cancer, Grow T Cells in a Lab