Healthy Stem Cells Have as Many Mutations as Leukemic Cells 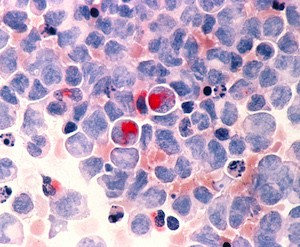 Researchers have found that the quantity of genetic mutations of hematopoietic stem cells (HSCs) in patients with acute myeloid leukemia (AML) is no greater than that of healthy individuals. These mutations are largely generated by normal, age-dependent processes that are constantly active during everyone's life.

"We thought that people with leukemia would have more mutations than healthy people, but this is not the case," commented the study's principal investigator, Ruben Van Boxtel, PhD, of the Princess Máxima Center for Pediatric Oncology in Utrecht, the Netherlands.

For the study, published in Cell Reports, the researchers from the Princess Máxima Center used whole-genome sequencing to analyze clones of healthy blood stem cells from seven individuals of different ages in order to study the development of somatic mutations—genetic alterations that a cell can pass on to its offspring in the course of cell division—over the human lifespan.

They found that mutations of hematopoietic stem and progenitor cells (HSPCs) accumulate gradually over a lifetime, at a rate of around 14 base substitutions per year. Since HSCs are believed to divide every 40 weeks, the researchers calculate that HSCs accumulate around 11 mutations during every cell division. For this reason, older individuals have more mutations. Clonal expansions of mutated stem cells within the blood occur more frequently as people age, increasing their risk of hematologic malignancies.

The majority of HSC base substitutions result from two age-dependent processes that are constantly occurring. Both of these processes have been known, the researchers say, to act "in a clock-like manner" in cancers. Since they also occur in healthy individuals, they may simply reflect normal mutational timing.

Dr. Van Boxtel emphasized the tremendous potential of this research technique when it comes to the development of cancer treatments: "If you study the pattern of mutations of a cancer cell, you can figure out which cell it comes from. We have shown this for HSPCs now, but especially for solid tumors, the origin of the cancer cell is very relevant for selecting the most effective treatment strategy."

Next, the researchers plan to study the origin of oncogenic mutations in second cancers occurring in survivors of childhood cancer.

"So far, we assumed that new mutations occur as a result of intensive treatment during childhood and cause second cancers later in life," remarked Dr. Van Boxtel. "We can now test whether these mutations are indeed new or already existed and contributed to both incidences of cancer. This is relevant knowledge when making a treatment plan for children with cancer."