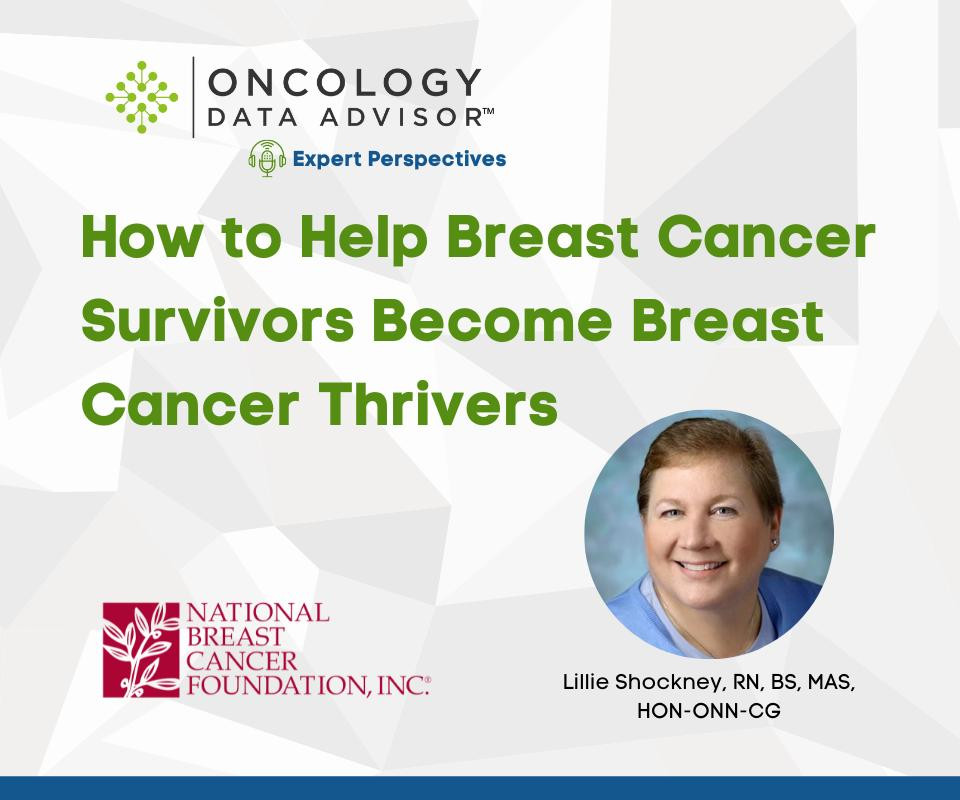 How can members of the cancer care team enable breast cancer survivors to become breast cancer thrivers? Watch as Lillie Shockney, RN, BS, MAS, HON-ONN-CG, Professor of Surgery at Johns Hopkins University and member of the National Breast Cancer Foundation Medical Advisory Council, explains how to provide optimal care and support for patients with breast cancer during their treatment and beyond.

Oncology Data Advisor: Welcome to Oncology Data Advisor. In this interview, Lillie Shockney, Professor of Surgery at Johns Hopkins University, will be discussing symptom management and survivorship for patients with breast. Thank you for joining us.

Oncology Data Advisor: How can women be empowered so that they speak up for themselves and let their doctors know when they're suffering with symptoms that impact their quality of life?

Lillie Shockney: The patient needs to be her own advocate, though I hope that she has a patient navigator or a nurse navigator also advocating for her. No one is meant to suffer. We don't get extra brownie points for doing that, believe me. This is 2021. Before we know it, we'll be into 2022. There are ways in which we can diminish side effects and diminish symptoms.

Fatigue is the number one side effect from radiation. It isn't just feeling tired; it's a level of exhaustion as if you've run a marathon without stopping to even take a water break. The doctor will say, "Plan on fatigue." Well, wait a minute. Research has been done, and it was done as long ago as 24 years ago. It proved that if breast cancer patients power walk for 30 minutes five times a week, they can diminish or eliminate radiation fatigue by 71%. Then why are we still telling patients to plan on fatigue and not giving them the solution? It's so silly. It's really ridiculous.

Some women are very worried about losing their hair. I've had women who refused to get chemotherapy if the drugs that have been recommended for them cause baldness. Well, there are now things to help that. There are cold caps that have shown to prevent hair follicles from falling out, so they can keep their hair. Why aren't patients being told about this? I don't know if it's habit from decades of just always telling them to plan for these things, or lack of knowledge, which would greatly disturb me. Wherever there's a symptom or a side effect, we usually have a solution. We may not be able to make it completely go away, but we can get it to be very manageable so that we can restore the patient's quality of life.

Lillie Shockney: There are several. There an organization called METAvivor, which I think is a very clever name, and it's a national organization for metastatic breast cancer patients. There is also an organization called the Metastatic Breast Cancer Network, which also provides support and resources for stage IV breast cancer patients. I began offering metastatic breast cancer retreats back as early as 2006. These are three days and two nights, so it's a long time together. For Johns Hopkins, I hold two a year. I also help other breast centers launch their first ones and continue to hold them at least annually. One is for couples. The other is for women not in a relationship. They bring their female family caregiver, which could be their mother, their sister, or sometimes their daughter. Every once in a while it's even a best friend, but it's just one person who comes with them.

Over these three days and two nights, we talk about the tough stuff that nobody wants to talk about, things that even they haven't talked about to one another oftentimes. We help them find solutions. We give them coping skills. There are sessions that make them laugh hysterically. I'm a firm believer in laughter. Laughter builds the number of T-cells that our bodies produce. T-cells are the cancer-fighting cells in our body. Each time we have a genuine belly laugh, we're actually doing some of our own cancer treatments. We also share with them information about clinical trials across the country that they may not be aware of. We have a breast medical oncologist who comes in to personally answer questions for them, general questions as well as personal treatment questions. It's like getting a free consult. They have a lot of networking time with one another, which they've usually never experienced before. Spouses and partners get time alone together, which is very important.

We also take steps to prepare them for what probably is going to lie ahead, rather than saying, "I don't want to think about that right now." We want them to take control of their life, and a way to do that is to prepare and plan for end of life, getting that finished so that when the time comes, they can spend their quality time with their family and not trying to do all these last-ditch measures of getting their affairs in order financially and legally. It's a nightmare when things have to be done in a hurry, and if it doesn't get finished, then it becomes a nightmare for the family. It's not the way anyone should leave this world.

With every single retreat we have held, the patients and their loved ones want to remain connected after it's completed. They always ask, "Can we get one another's email addresses?" We say, "You know what? We thought that might be the case." They write their initials beside their name to agree to release their email, post office address, and cell phone number, and then we make copies of the roster before everyone goes home. Over those three days, we've identified someone that we think is an informal leader among the group, and we'll ask that person to create a closed Facebook page for all of them. They remain connected via that closed Facebook page. They cheer one another on when they get good news on a scan. They pray for one another when someone gets bad news or needs to go on oxygen, or the clinical trial didn't work so now they're going to try something different. They remain connected until there's just one person left. Just one loved one left. That means they're connected in some cases for a decade or more, which is pretty terrific.

We've also become aware that no matter what the distance, they will travel to one another's funerals. The patients that come to the Johns Hopkins retreats are not just Hopkins patients. I open it up to any patient getting treatment anywhere in the United States. They need to provide their own transportation to get to me at the retreat center, but once they're there, everything is free.

Oncology Data Advisor: What are some of the biggest challenges as women are living longer with their breast cancer?

Lillie Shockney: Being believed that they have metastatic breast cancer is one of the greatest challenges. Oftentimes they will look very healthy, and we have this assumed image of what someone who has advanced cancer should look like—like they should look like the walking dead. They should look like their face should be drawn and ashen and maybe already jaundiced. They wouldn't be able to walk. They would be in a wheelchair. They can't eat. They can't go out—all these images that we have. We need to undo that image, and maybe line up five people and say, "Which patient in this lineup here has metastatic breast cancer?" There's one woman in a wheelchair, and the other four are standing, including one with a tennis racket, one with her laptop, and another one with a violin. You know everyone is going to go to the woman in the wheelchair, and I'm going to say, "No, that woman has multiple sclerosis, and the other four all have metastatic breast cancer."

We can undo this false image, because it's very hurtful. They literally are not believed. They talk about that at these retreats: how they'll go to the grocery store and somebody that they haven't seen for a long time will walk over. "Oh, you look great. Your cancer's gone, right? When do you finish your treatment?" They say, "Well, I will never be finished with my treatment." People reply, "Well, why is that?" It's exhausting and annoying.

We need to educate people as to what the new image of metastatic breast cancer is. My girlfriend refers to herself as a breast cancer thriver. She doesn't say she's a survivor; she says she's a thriver. I like that.

METAvivor (2021). About METAvivor. Available at: https://www.metavivor.org/about-us/