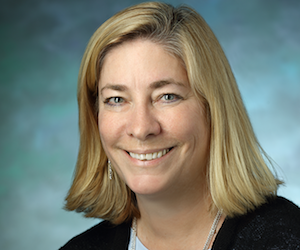 ​The FDA's approval of atezolizumab (Tecentriq®, Genentech, Inc.) in combination with nab-paclitaxel for patients with previously untreated unresectable locally advanced or metastatic triple-negative breast cancer (TNBC) expressing programmed death-ligand 1 (PD-L1) represents the first approval of an immune checkpoint inhibitor for breast cancer. In addition, it is an important development for patients with TNBC, which lacks many of the targeted therapies that can be used in other types of breast cancer. In this interview with i3 Health, Leisha Emens, MD, PhD, senior author of the IMpassion130 study on which the approval was based, discusses the approval's significance and the rise of immunotherapy in the treatment of TNBC and other forms of breast cancer.

Can you comment on the significance of the recent FDA approval of atezolizumab/nab-paclitaxel for locally advanced or metastatic PD-L1–positive TNBC?

Leisha Emens, MD, PhD: This approval is the first for immunotherapy in any type of breast cancer, and it is the first monoclonal-antibody–based targeted therapy for TNBC to be endorsed by the FDA. The specificity of the immunotherapy and its potential for long-lasting responses set it apart from the traditional chemotherapy-based treatments used for TNBC.

What would you advise physicians to consider in balancing atezolizumab/nab-paclitaxel against other options for locally advanced or metastatic PD-L1–positive TNBC?

Dr. Emens: Atezolizumab/nab-paclitaxel offers the potential for longer responses due to the way the immune system works. It also carries with it the potential for a spectrum of immune-related adverse events. Clinicians should be vigilant for side effects that may be immune based and be ready to intervene early by following accepted algorithms.

How do you see immunotherapy evolving for TNBC and for breast cancer in general?

Dr. Emens: There will be more immunotherapy options coming for TNBC and other breast cancer subtypes. These will likely involve novel combinations of immunotherapy with standard chemotherapy and/or radiation, or with other emerging immunotherapy agents. Additional studies are testing the safety and efficacy of programmed cell death protein-1 (PD-1)/PD-L1 blockade in earlier stages of breast cancer.

What are the key takeaways of this study for community oncologists treating patients with TNBC?

Dr. Emens: Data suggest that it is best to use immunotherapy early in the course of metastatic disease. The phase 3 trial tested the combination of atezolizumab and nab-paclitaxel for the first-line therapy of patients with incurable PD-L1–positive TNBC, where patients may have the greatest likelihood of benefit.

Leisha A. Emens, MD, PhD, is a Professor of Medicine in Hematology/Oncology at the University of Pittsburgh Medical Center (UPMC) and Co-leader of UPMC's Hillman Cancer Immunology and Immunotherapy Program. In addition, she is the Director of Translational Immunotherapy for the Women's Cancer Research Center (WCRC).

Developments in Breast Imaging and Radiology: A Conversation With Tricia Trammell