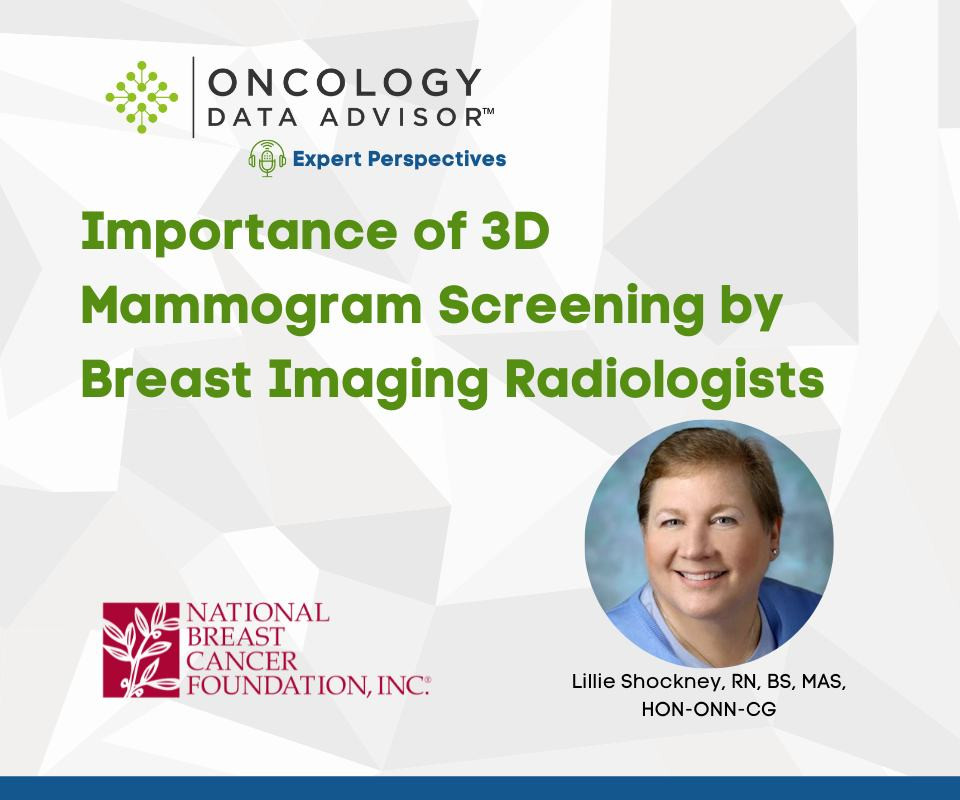 Oncology Data Advisor: Do women have to ask if their screening will be done with 3D mammogram?

Lillie S. Shockney: I recommend that they do ask, although across the country, all breast imaging facilities are supposed to be using 3D mammography. It also is known as tomosynthesis. What we don't want done anymore are analog mammograms, where we actually use X-ray film. Those machines should be long, long, long gone out of breast imaging facilities. I will tell you that if you travel to other countries, you may very well still be getting the old-fashioned archaic two-view analog mammogram. Hopefully the individuals listening to this program are here in the United States, but if they're traveling or they move for a year to do something elsewhere, they probably should come back home to get their imaging study done.

The 3D mammograms have been proven to be more than 28% more accurate than the prior X-ray mammography. We are able to enlarge the breast on the computer screen to make it look like it's the size of your desk. In doing so, we can really get in there into the nooks and crannies and see things that we were not able to capture before. That also means that if this is a woman's first 3D mammogram, she should not be surprised if they want to take extra images, because they will find all of these little funny pixels in the nooks and crannies and they just need to rule out that they are any problems. I know that women always get nervous when mammo tech says, "The doctor wants to have some additional imaging done," and you freak out right then, figuring, "Well, he didn't come in to tell me, because he doesn't want to tell me yet that I have breast cancer, but obviously I do, because they want to do additional imaging." That usually is not the case.

Today there is a shortage of breast imaging radiologists, and because of that, it is not unfortunately unusual that it may be a general radiologist reading women's mammograms today. A woman should ask though and say, "You do have a breast imaging radiologist who specializes and only reads breast images here to read my mammogram. Correct?" If they say "No, we have a general radiologist that comes in on Sundays and reads 200 mammograms in two hours," you don't want to have your mammogram done there. You should get your bra back on, get your shirt back on, and frankly, leave.

There was a national study done a little over 10 years ago for the purpose of taking a look at how accurately general radiologists who do read mammograms are in reading them. They took 10,000 mammograms; 5,000 did have a finding of breast cancer on those imaging studies, and 5,000 did not. This was determined by having first a breast imaging radiologist look at all 10,000, then they had the general radiologist read these 10,000 images and saw what they found or did not find. In those that did in fact have breast cancer that visualized on those mammograms, the general radiologist missed it 41% of the time. Well, that defeats the purpose of a woman doing the right thing by getting a mammogram every year, if the doctor reading the imaging doesn't know how to find or recognize breast cancer on it.

So what's she going to do? She's going to get a report that says no trouble, no findings, then the next year, maybe she'll get no trouble, no findings again. Then the third year, somebody's going to say, "Wow, you've got a pretty big breast cancer in your breast." Someone looking retrospectively, because now they know where the needle is in the haystack, because it grew into a great big mass, would say, "Oh yeah, I can see that from last year and the year before and the year before."

Why would a general radiologist not be able to see it? Radiologists are trained to read bones. That's what they read; that's what they specialize in, the skeletal structure. There are no bones in our breasts. Radiologists are supposed to do at least a one-year fellowship of additional education after they graduate from medical school in order to specialize in being a breast imaging radiologist. It's not just someone saying, "I'm a breast imaging radiologist, I look at mammograms on Sundays." This is all breast imaging radiologists do; they live and breathe reading breast imaging studies. They're going to have the eagle eyes that you need them to have to identify and find something at its very earliest, and that's why we want to do screenings: to dentify before there's any symptoms that a patient would find themselves or that a doctor would find in doing a clinical breast exam on her.

I urge people, if they are going to a place to have a screening mammogram, they should call ahead and ask, "Do you have breast imaging radiologists, and is all they do and live and breathe breast imaging studies? Or do you have general radiologists that come in and read them on weekends?" If they say, "No, we have a general radiologist," then you just say, "Well, thank you very much." You're going to call other places until you find one in your geographic area that in fact does have specialists.

As I did mention, there is a shortage of them. We're trying to promote this by starting with medical students and then into residency with senior residents and chief residents, encouraging people to go into breast imaging radiology. It's not considered a field that is, I'll use a strong word and say "sexy". We have the same problem with nurses graduating from nursing schools. They don't want to become oncology nurses; they think that's depressing. I take great joy in taking care of my breast cancer patients. I consider it a real calling, but television has tarnished the view of oncology. With these drama shows are on every week that are medically-driven, they show the emergency room, the trauma center, and the critical care units, which some student nurses think look really sexy. That's where they want to go and become a nurse. They usually burn out quite quickly going into that as their first nursing job.

Well, we see the same thing with residents. They say, "I want fast speed, I want to make rapid decisions, I want it to be all exciting." I just want you to do a good job and do it in a compassionate way and be passionate about your work. That doesn't mean that you have to go into one of those three areas. You could come over here with me and take care of breast cancer patients.