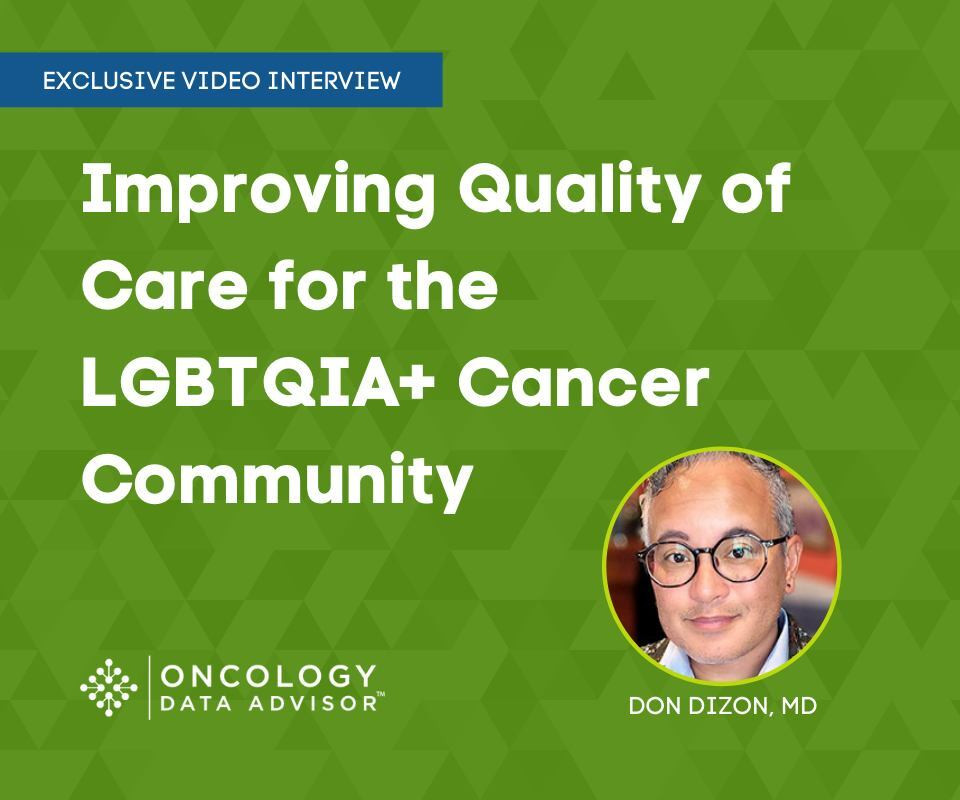 In this interview with Oncology Data Advisor, Dr. Don S. Dizon continues the conversation he had at the recent 47th Annual Oncology Nursing Society (ONS) Congress, where he and three other professionals held a panel to spearhead the topic of improving quality of care for LGBTQIA+ individuals with cancer.

Oncology Data Advisor: Welcome to Oncology Data Advisor. Today, I am joined by Dr. Don Dizon, Professor of Medicine at Brown University in Providence, Rhode Island. Recently, Dr. Dizon spoke at ONS Congress regarding improving quality of care for the LGBTQIA+ community. Thank you for your time today, Dr. Dizon. And would you like to tell us a bit about yourself?

Don S. Dizon, MD, FACP, FASCO: My name is Don Dizon. I am a Professor of Medicine and Professor of Surgery here at Brown University. I see patients in the Pelvic Malignancies Program at Lifespan Cancer Institute, and for the University, I am Head of Community Outreach and Engagement for Legorreta Cancer Center at Brown. As far as my work goes in the understanding and addressing disparities in sexual and gender minority individuals, I am on the Board of the LGBTQ Cancer Network, and I am on the task force for the American Society of Clinical Oncology (ASCO) on sexual and gender minoritized people.

Oncology Data Advisor: Very cool. Thank you for that. So, we will go ahead and get into the questions now. First one is, what are some of the cancer-related disparities that exist amongst the LGBTQIA+ community?

Dr. Dizon: When it comes to the LGBTQ—which probably I will simplify by just calling them SGM, or sexual and gender minoritized people—the disparities occur in the incidence of cancers; it has very limited data but suggests there may be differences in the way they are approached with treatments and also in terms of survival. Again, I think the major thing to stress is that the data sets are exceptionally small because one of the major issues is that we are not collecting SGM data in a routine and organized way. By that, I mean we're not collecting sexual orientation and gender identity data as part of the routine demographics when people are diagnosed with cancer, or even when they enter on clinical trials. But what we understand is that if you just look at, say, the incidence rates of cervical cancer, it's higher in lesbian and bisexual women compared with cisgender women.

We also know that if you look at the SGM community in a more intersectional way, there are things that overlap with other disparity factors when it comes to cancer and its treatments—namely, a higher rate of people living at or below the poverty line, higher rates of smoking, and even higher rates of obesity within the communities. When you couple that with hostility that many people have experienced as part of health care at some point in their lives, there's also that reluctance to seek or even have preventative care. We see that in the screening when it's by Pap smear, prostate-specific antigen (PSA), or even other methods in which SGM people are less likely to undergo screening compared with non-SGM people.

Oncology Data Advisor: What is the knowledge gap among oncology professionals regarding the health needs of the SGM community in patients?

Dr. Dizon: Well, I think there was a really nice study by a group that's based with Gwendolyn Quinn in New York City. She looked at surveys among clinicians at National Comprehensive Cancer Network–affiliated institutions, which are by definition National Cancer Institute (NCI) comprehensive cancer centers. Certainly, at the start of the survey, it seemed like everyone was more familiar with how to care for gay and lesbian patients—not so much with the transgender communities, but there was a willingness to learn. There was also this interesting statement that not everyone felt it was important to capture sexual orientation.

I thought that was surprising; nearly 50%, a large proportion, did not feel this was relevant information. More people thought it was important to collect information about sex assigned at birth and to also understand gender identity, but not so much with sexual orientation. But what was most interesting is at the end of that survey, people also realized that what they thought they knew was much less than what they actually knew. There was an appetite for better education, but surprisingly, whether or not it should be mandatory was very much not widely seen as important.

Oncology Data Advisor: And how do you believe oncology nurses could challenge their assumptions related to the SGM community and cancer care?

Dr. Dizon: Well, I think just like other folks within a cancer center, we all have to better be aware of our own implicit biases. When you see two women in a room, it's not an uncommon experience among lesbians to be incorrectly identified as sisters, for example—that's an example of a bias that some people may have. So, there's this whole notion that we have these assumptions about who people are when they enter our center and that it is only when it is apparent based on gender expression—that one is not, say, heterosexual, and that's what prompts questions.

It also really ignores the fact that there are many people in the community who can pass for heterosexual, and not giving them that opportunity also robs them of the opportunity to let you know who they are and to identify if they choose to. I think nurses, as I said, in the conference are the conscience of the cancer center. What that means is that they are oftentimes along with, say, our social workers, and maybe some physicians who are invested in these areas specific to their own communities or their own experiences.

There can be part of a core group to point out where things are important and where things are not being addressed in a more sensitive way, and also to ask for some changes. The whole approach to the SGM community requires a strategy that really isn't limited by someone's role or someone's position in the cancer center. It has to be thought of in terms of implementation—how can we implement a change in a way that reflects our center's core values? And that means understanding education from everyone that works within our centers, maybe even outside the cancer centers, to embrace diversity and equity as pillars in the treatment of cancer and other medical conditions.

Oncology Data Advisor: Amazing. And last question, what resources could you recommend to oncology nurses, or anyone, to learn more about the SGM cancer care community?

Dr. Dizon: If your institution values diversity, equity, and inclusion, this should be something that is addressed at the institutional level; and the resources, which are so dependent on the communities you work in, should be available. If they are not, then we need to ask for them.

Oncology Data Advisor: Okay. Amazing. Thank you so much for your time today.

Dr. Dizon: Okay. Thank you so much.

Don Dizon, MD, FACP, FASCO, is a Professor of Medicine and Professor of Surgery at Brown University in Providence, Rhode Island, as well as the Head of Community Outreach and Engagement for the Legorreta Cancer Center at Brown. He is also the Director of the Pelvic Malignancies Program at Lifespan Cancer Institute. Dr. Dizon has a passion for bringing awareness to the topic of improving quality of care for the sexual and gender minoritized (SGM) community, and he serves on the Board of the LGBTQ Cancer Network and the SGM Task Force at ASCO.

From the Patient’s Perspective: Improving Quality of Care for the LGBTQIA+ Community With Reverend Sean Parker Dennison