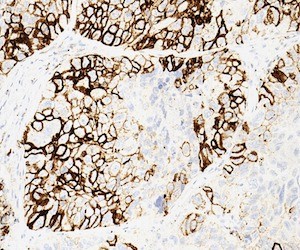 Historically, patients with stage IV anaplastic lymphoma kinase-positive (ALK+) lung cancer had a dismal prognosis; between the years 1995 and 2001, only 15% of those with this disease lived past 5 years of diagnosis. However, recent studies show that patients with this cancer have been living longer.

In a study published in the Journal of Thoracic Oncology, investigators working for the University of Colorado Cancer Center determined that patients diagnosed with stage IV ALK+ non-small cell lung cancer (NSCLC) treated at UCHealth University of Colorado Hospital between the years 2009 and 2017 had a median survival of 6.8 years after diagnosis.

Jose Pacheco, MD, investigator at CU Cancer Center and the study's leading author, commented, "What this shows is that with the development of good targeted therapies for ALK-positive lung cancer, even patients with stage IV disease can do well for many, many years."

The study population consisted of 110 patients who were all initially treated with crizotinib, which was approved by the FDA in August 2011 for ALK+ NSCLC. Noting the various studies that have reported shorter median overall survival in patients with stage IV ALK+ NSCLC taking crizotinib, Dr. Pacheco remarked, "These studies had lower survival outcomes in large part because of a lower percentage of patients receiving [next-generation] ALK inhibitors after progressing on crizotinib. Patients here were getting [next-generation] ALK inhibitors in phase 1 and 2 clinical trials before many other centers had access to them."

After treatment with crizotinib, participants in this study switched to a different ALK inhibitor, either brigatinib, alectinib, or certinib, which contributed to increasing life expectancy. Pemetrexed-based chemotherapies have also been correlated to a better prognosis, especially for those with ALK+ lung cancer.

"At this point, 6.8 years is one of the longest median survivals ever reported for a NSCLC subpopulation with stage IV disease," Dr. Pacheco stated. "It shows the benefit of targeted therapy and how it's changing survival for a lot of patients, and I think it suggests that for some types of NSCLC, it may become much more of a chronic condition rather than a terminal disease."