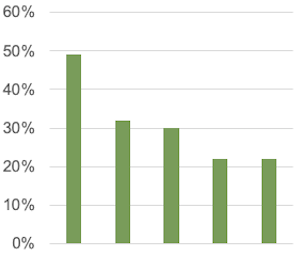 Over the past few years, the treatment options for castration-resistant prostate cancer (CRPC) have increased to include novel hormone therapies, second-generation taxanes, immunotherapy, and bone-targeted and bone metastasis-targeted agents. Due to an absence of large prospective trials, clinical decision making needs to be based on many different factors, including optimal treatment sequences and combinations, patient health status (eg, asymptomatic or symptomatic), rate of disease progression and disease burden, presence of bone or visceral metastases, mechanism of action and tolerability of available agents, and prior line(s) of therapy and response.

The 65 participants included 60 physicians, 1 nurse practitioner, and 4 others. Participants had an average of 22 years in practice and saw an average of 3 patients with CRPC per month. Results of pretests administered prior to the educational content demonstrated the following knowledge at baseline:

After the educational content was presented, participants answered the same questions to see if their understanding of CRPC treatments had increased. Competence in CRPC risk assessment and treatment selection and sequencing improved after receiving the educational intervention but remained suboptimal, suggesting areas of educational need. In addition, gaps between actual practice and evidence-based practice were evident. Based on these data, further education is needed regarding CRPC risk assessment, efficacy and safety of novel therapies, implications of resistance in treatment selection, and treatment sequencing.

After completing the activity, 89% of participants indicated they felt more confident in treating their patients and felt that material presented would be used to improve the outcomes of their patients.