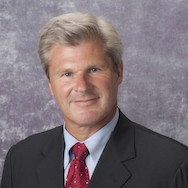 In an interview with i3 Health, Mark A. Socinski, MD, shares insights regarding the recent FDA approval of atezolizumab (Tecentriq®, Genentech, Inc.) in combination with carboplatin/paclitaxel/bevacizumab for patients with previously untreated metastatic nonsquamous, non-small cell lung cancer (NSCLC) without EGFR or ALK tumor mutations. Dr. Socinski, Executive Medical Director and Medical Oncologist at the Florida Hospital Cancer Institute, was the lead researcher on the IMpower150 trial (NCT02366143), which served as the basis for the FDA approval.

Can you comment on the significance of the recent approval of atezolizumab for metastatic, nonsquamous NSCLC?

Mark A. Socinski, MD: So as you well know, one of the platforms that we have to treat advanced nonsquamous NSCLC is the FDA-approved regimen of carboplatin/paclitaxel/bevacizumab. There is much preclinical data to suggest that combining anti-VEGF therapy with anti–PD-1 or PD-L1 therapy would be either additive or synergistic in terms of mounting a more competent immune response.

My belief is that bevacizumab still has a role in the treatment of nonsquamous NSCLC. In this era of immunotherapy, essentially what we've done is combine immunotherapy, which is a standard second-line therapy, with standard first-line therapies and show that when you combine these two, you get better outcomes in terms of overall survival, so I think this was an important approval.

What would you advise doctors to consider in balancing this treatment option against other options that they have for this condition?

Dr. Socinski: My thinking is that prior to the age of immunotherapy, in nonsquamous NSCLC, I would basically consider what would be the best platinum-based doublet for the patient; pretty much the two choices we had were carboplatin/paclitaxel or carboplatin/pemetrexed. Then the second consideration was whether the patient would be eligible for bevacizumab. We have four positive randomized trials adding bevacizumab to chemotherapy, so I think there's a role for bevacizumab. Prior to this era that we're in now, the question was what's the best chemo regimen, and then are you going to add bevacizumab to it? So we typically treated people with either carboplatin/pemetrexed or carboplatin/paclitaxel/bevacizumab; some patients would substitute the paclitaxel with pemetrexed and still use bevacizumab.

I think what we've seen this year is that if you have a patient whose optimal treatment is carboplatin/pemetrexed alone, then the KEYNOTE 189 strategy of adding pembrolizumab to those patients is a phase 3-bolstered recommendation; we have an FDA approval. However, if you have a patient that is eligible to get bevacizumab, then IMpower150 justifies the use of a four-drug regimen, in this case using atezolizumab, to improve outcome.

In this era, doctors should not forget about the value of bevacizumab; again, I want to emphasize that it has four randomized trials, all of which met their end points. For two of the trials, the end point was overall survival, so bevacizumab clearly has a role in the disease, just as it does in other diseases. There are lots of reasons not to give bevacizumab because it does have side effects, but if you have a patient in which there are clearly no contraindications, then I do still use it. This indication allows me to use it with immunotherapy, in this case atezolizumab, along with carboplatin/paclitaxel.

What are some of the biggest challenges in treating patients with metastatic nonsquamous NSCLC?


Dr. Socinski: Nonsquamous NSCLC is a disease that demands comprehensive genomic testing. We have a number of actionable oncogenic drivers—EGFR mutations, ALK, ROS1, BRAF, MET exon 14, RET fusions, NTRK fusions, all these sorts of things—and that list is still growing.

I think one of the biggest challenges is making sure that testing is done in a comprehensive manner to identify patients who may have these oncogenic drivers. I'm not sure how comprehensive testing is across the board if you look at the entire United States; it's certainly not at the level of 100%.

I always say that finding an oncogenic driver trumps PD-L1 status in immunotherapy, so the biggest challenge is making sure to get adequate tissue to do comprehensive genomic testing. If you find the driver, you should use targeted therapy to treat the driver. It's generally more effective than chemotherapy, and this is not a group of patients that typically has great results with immunotherapy.

If you've ruled out an oncogenic driver, then I think that the exercise you go through is typically histology based. We use different doublets for nonsquamous NSCLC than we do for squamous. In the nonsquamous population, you use either carboplatin/paclitaxel or carboplatin/pemetrexed. And as we discussed, are you going use bevacizumab? If you are, the IMpower150 regimen is what I would go with. If bevacizumab is not indicated or is contraindicated, then I would use the KEYNOTE 189 regimen.

Do you have any final words of advice for community oncologists treating patients with NSCLC?

Dr. Socinski: Just make sure that you do comprehensive genomic testing—cover all those bases—and then pretty much follow the guidelines that I said before. Don't forget about bevacizumab, as we now have an FDA approval for the use of immunotherapy in combination. That would be the take-home message.

Mark A. Socinski, MD, is a medical oncologist specializing in thoracic malignancies, including small cell and non-small cell lung cancers and mesothelioma. He currently serves as the Executive Medical Director of the Florida Hospital Cancer Institute. He has extensive experience in research and clinical trials and has spent over 20 years in academia, most recently at the University of Pittsburgh School of Medicine.

Clinicaltrials.gov (2018). A study of atezolizumab in combination with carboplatin plus (+) paclitaxel with or without bevacizumab compared with carboplatin+paclitaxel+bevacizumab in participants with stage IV non-squamous non-small cell lung cancer (NSCLC) (IMpower150). NLM identifier: NCT02366143.