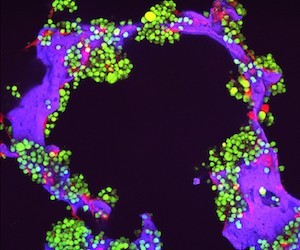 The second most common hematological cancer, multiple myeloma has seen substantial increases in survival in recent years, thanks to a variety of new therapies. However, around 20% of patients still relapse or die within two years of diagnosis. Of these high-risk patients, "many do not have known high-risk features at diagnosis," write lead author Benjamin G. Barwick, PhD, Bioinformatic Analyst at Emory University, and the other authors of the study, published in Nature Communications. "Understanding how to identify and treat these patients as well as the mechanisms underlying the biology of high-risk myeloma is critical for improving outcomes."

The researchers used long-insert whole-genome sequencing to analyze the genomic landscape of 795 patients with newly diagnosed multiple myeloma. This investigation, done as part of the Clinical Outcomes in Multiple Myeloma to Personal Assessment (CoMMpass) study, revealed recurrent genetic translocations in 66.4% of patients. The most common translocations were immunoglobulin translocations, including t(11;14), t(4;14), t(MYC), and others. Very few of these translocations predicted prognosis, with one significant exception: translocation involving the IgL light chain locus, which occurs in 10% of patients, was linked to significantly worse progression-free survival and overall survival.

This correlation with a poor prognosis was particularly strong for IgL-MYC translocations, which coincided with focal amplifications of the IgL 3' enhancer—one of the most active enhancers in myeloma cells—in 68% of patients. The investigators found that 78% of IgL-MYC translocations co-occur with hyperdiploid disease. Since hyperdiploidy is typically considered a marker of favorable prognosis, the researchers state that the co-occurrence of hyperdiploidy "thus could result in the misclassification of patients with t(IgL) myeloma."

"Most patients who have an IgL translocation are actually being diagnosed as having standard-risk disease, so this study has helped explain why some patients who we think will do well end up relapsing and dying early," explains the study's senior author, Lawrence Boise, PhD, Professor and Vice Chair for Basic Research in the Department of Hematology and Medical Oncology at Winship Cancer Institute and Emory University School of Medicine.

The researchers found a key piece of information regarding the potential cause of poor prognosis in patients with IgL translocations: these patients do not benefit from IMiD-containing therapies because IMiDs target the lymphocyte-specific transcription factor Ikaros (IKZF1), which binds the IgL enhancer at very high levels in the myeloma epigenome. This means that several IMiDs used in myeloma treatment, including lenalidomide and pomalidomide, will not work for patients with IgL translocations.

As Dr. Boise notes, "This could be different than other markers that we currently use in myeloma because it may influence which drugs physicians may choose in both initial treatment as well as maintenance therapy."