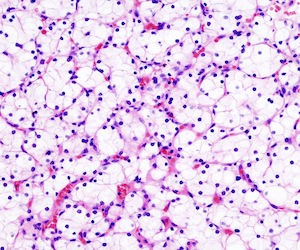 As an immunotherapy drug, pembrolizumab fights cancer by working with the patient's immune system. The drug effectively blocks the PD-1 pathway so that cancer cells are not able to evade attack from T cells, the body's natural immune defense. Axitinib, which works by preventing new blood vessels from forming, thereby hindering cancerous cell growth, had previously been approved for second-line treatment of metastatic RCC.

Approval of pembrolizumab/axitinib was based on a phase 3 trial (NCT02853331), published in the Journal of Clinical Oncology. In this study, 861 patients with locally advanced or metastatic RCC were randomized in a 1:1 ratio to receive either 200 mg pembrolizumab intravenously for three weeks plus 5 mg axitinib orally twice a day or 50 mg sunitinib orally; both groups received treatment on a 4-weeks-on, 2-weeks-off schedule. In order to be eligible for the study, patients must have received no previous systemic therapy for RCC and needed to have a Karnofsky Performance Status ³70%.

Clinicaltrials.gov (2019). Study to evaluate the efficacy and safety of pembrolizumab (MK-3475) in combination with axitinib versus sunitinib monotherapy in participants with renal cell carcinoma (MK-3475-426/KEYNOTE-426). NLM identifier: NCT02853331.