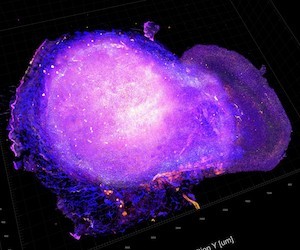 Researchers have used a computer program to design a protein that mimics the action of interleukin 2 (IL-2) and interleukin 15 (IL-15) without the toxic side effects.

Interleukin 2 (IL-2), a cytokine that regulates the activities of the immune system's white blood cells, is a powerful anti-cancer drug used to treat metastatic melanoma and renal cell carcinoma. However, its toxic side effects, such as impairment of kidney function, have limited its use as a cancer-fighting agent.

"People have tried for 30 years to alter IL-2 to make it safer and more effective, but because naturally occurring proteins tend not to be very stable, this has proved to be very hard to do," commented one of the study's lead authors, Daniel-Adriano Silva, PhD, a biochemist at the University of Washington Medicine's Institute for Protein Design (IPD).

Using a new computational approach for designing proteins that have the same binding sites as natural cytokines but are otherwise unrelated to them, the researchers created the new protein, which they have called neoleukin-2/15 (Neo-2/15) because it mimics properties of both IL-2 and another interleukin, IL-15, which is being studied for its potential as an immunotherapeutic agent.

"Neo-2/15 has therapeutic properties that are at least as good as or better than naturally occurring IL-2, but it was computationally designed to be much less toxic," stated another of the study's lead authors, Umut Ulge, MD, PhD, an internal medicine physician and IPD biochemist.

The researchers designed Neo-2/15 to bind to IL-2's βγc heterodimer (IL-2Rβγc), a receptor that is important for fighting cancer, without binding to two other receptors that are responsible for toxic side effects: IL-2Rα, also known as CD25, and IL-15Rα, known as CD215.

"Neo-2/15 is very small and very stable," remarked Dr. Silva. "Because we designed it from scratch, we understand all its parts, and we can continue to improve it, making it even more stable and active."

In addition to being highly stable, Neo 2/15 binds to human and mouse IL-2Rβγc even better than the naturally occurring IL-2. It also manages to elicit downstream cell signaling without use of IL-2Rα and IL-15Rα. Furthermore, in mouse models of melanoma and colon cancer, Neo-2/15 demonstrated superior therapeutic activity compared with IL-2, with less toxicity and no detectable immunogenicity (the ability to provoke an antagonistic immune response).

In their scientific paper, published in Nature, the study authors emphasize the broad applicability of their computational approach for protein design: "Our strategy for building hyper-stable de novo mimetics could be applied generally to signaling proteins, enabling the creation of superior therapeutic candidates."