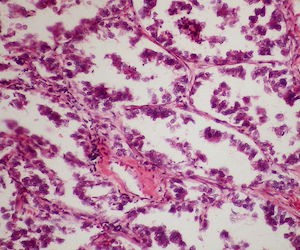 A phase 2 clinical trial assessing the feasibility of adjuvant palbociclib (Ibrance®, Pfizer) and endocrine therapy for patients with early breast cancer reports that it is an effective treatment for these patients.

For the study, published in Annals of Oncology, the researchers administered 125 mg of palbociclib daily, three weeks on and one week off, with endocrine therapy for two years to 162 patients with hormone receptor-positive, human epidermal growth factor receptor 2 (HER2)-negative stage II to III breast cancer. Over half of the patients had stage III disease, and most had been previously treated. The primary end point was a discontinuation rate of greater than 48%, which would indicate that the two-year treatment duration was not feasible.

One hundred and two patients finished two years of palbociclib. Sixty patients discontinued treatment overall, 50 due to protocol-related reasons and 10 due to unrelated reasons.

"Adjuvant palbociclib is feasible in early breast cancer, with a high proportion of patients able to complete two years of therapy," conclude the study authors. "The safety profile in the adjuvant setting mirrors that observed in metastatic disease, with approximately half of the patients requiring dose modification. As extended-duration adjuvant palbociclib appears feasible and tolerable for most patients, randomized phase III trials are evaluating clinical benefit in this population."