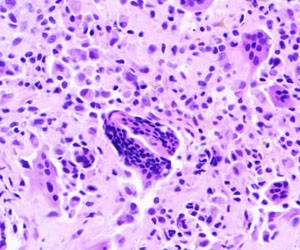 The FDA has now approved pexidartinib (TuralioTM, Daiichi Sankyo, Inc.) for adults with symptomatic tenosynovial giant cell tumor (TGCT) that does not respond to surgery and is associated with severe morbidity or functional limitations. This is the first FDA approval for TGCT.

A locally aggressive neoplasm of the synovium of joints and tendon sheaths, TGCT is a rare disease that causes inflammation, pain, swelling, and the destruction of joints. Symptoms result in part from colony-stimulating factor 1 (CSF1) receptor-bearing macrophages. These are drawn to the tumor by CSF1, which is overexpressed in TGCT. Pexidartinib is a CSF1 receptor inhibitor.

The approval was based on ENLIVEN (NCT02371369), a phase 3 trial involving 120 patients with symptomatic, advanced TGCT not recommended for surgery. For the first part of the trial, patients were randomized to receive pexidartinib (61 patients) or placebo (59 patients). Those in the pexidartinib arm received 1,000 mg orally per day—400 mg in the morning and 600 mg in the evening—for two weeks, followed by 800 mg per day (400 mg twice a day) for 22 weeks. The trial's second part consisted of an open-label study of pexidartinib for all patients. The study's primary end point was overall response at week 25 according to Response Evaluation Criteria in Solid Tumors (RECIST), version 1.1.

The data monitoring committee discontinued enrollment six patients short of target due to the occurrence of mixed or cholestatic hepatotoxicity. Three patients receiving pexidartinib had elevations of aminotransferase that were at least three times the upper limit of normal, with total bilirubin and alkaline phosphatase at least twice the upper limit of normal, indicating mixed or cholestatic hepatotoxicity. For one patient, the hepatotoxicity lasted seven months and was confirmed by biopsy.

"Pexidartinib is the first systemic therapy to show a robust tumor response in TGCT with improved patient symptoms and functional outcomes," write the researchers, led by first author William D. Tap, MD, Chief of the Sarcoma Medical Oncology Service at Memorial Sloan Kettering Cancer Center, in their publication in The Lancet. "Mixed or cholestatic hepatotoxicity is an identified risk. Pexidartinib could be considered as a potential treatment for TGCT associated with severe morbidity or functional limitations in cases not amenable to improvement with surgery."

The prescribing information includes a boxed warning concerning the risk of serious and potentially fatal liver injury. Liver tests should be monitored prior to treatment and at specified intervals during treatment. Pexidartinib is only available through the TuralioTM Risk Evaluation and Mitigation Strategy (REMS) Program.

Depression and Suicide Risk in Oncologists: Daniel C. McFarland, DO