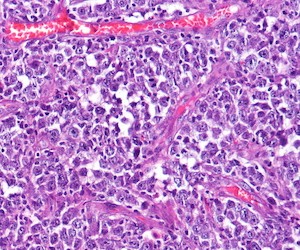 The FDA has now granted accelerated approval to polatuzumab vedotin (Polivy®, Genentech, Inc.) in combination with bendamustine and a rituximab product for adults with relapsed or refractory diffuse large B-cell lymphoma (DLBCL), not otherwise specified, following two or more prior lines of therapy.

Estimates of five-year survival for DLBCL have been reported at 62.0% in the United States and 55.4% in Europe. Over 50% of patients with advanced-stage, previously untreated DLBCL experience complete responses to immunochemotherapy with R-CHOP (rituximab combined with cyclophosphamide/doxorubicin/vincristine/prednisone). However, 20% to 50% of patients are refractory to R-CHOP or relapse following a complete response. Most of these patients have no curative treatment options. Only 30% to 40% respond to salvage chemotherapy; such patients are often then administered autologous stem cell transplantation (ASCT) if they are able to undergo this procedure, but around 50% of patients receiving ASCT then relapse, leaving them with a poor prognosis.

"Today's approval of [polatuzumab vedotin] provides an alternative option for patients in whom multiple treatments have not worked," commented Richard Pazdur, MD, Director of the FDA's Oncology Center of Excellence and Acting Director of the Office of Hematology and Oncology Products in the FDA's Center for Drug Evaluation and Research.

Polatuzumab vedotin is a CD79b-directed antibody-drug conjugate. A form of targeted immunotherapy, an antibody-drug conjugate consists of a highly selective monoclonal antibody for an antigen that is expressed on tumor cells but not on healthy cells, a cytotoxic (cell-killing) agent that induces cell death in the target tumor cell after it is released, and a linker that releases the cytotoxic agent in the target cells.

"This type of therapy, unlike traditional chemotherapy, is intended to target specific cells," explained Dr. Pazdur.

Approval was based on Study GO29365 (NCT02257567), which randomized 80 transplant-ineligible patients with relapsed/refractory DLBCL following at least one prior therapy to receive either polatuzumab vedotin (P) in combination with bendamustine and a rituximab product (BR) or BR alone for six 21-day cycles. Patients in the P-BR group were given intravenous polatuzumab vedotin, 1.8 mg/kg, on day 2 of cycle 1 and on day 1 of subsequent cycles. Patients in both treatment arms were administered intravenous bendamustine, 90 mg/m2, on days 2 and 3 of cycle 1 and on days 1 and 2 of subsequent cycles, and they were given an intravenous rituximab product (375 mg/m2) on day 1 of each cycle. Patients were followed for a median of 22.3 months.

Patients should be closely monitored for infusion-related reactions, low blood counts, serious infections, tumor lysis syndrome, hepatotoxicity, and progressive multifocal leukoencephalopathy (PML). Polatuzumab vedotin should not be administered to women who are pregnant or breastfeeding.

Clinicaltrials.gov (2019). A study of polatuzumab vedotin (DCDS4501A) in combination with rituximab or obinutuzumab plus bendamustine in participants with relapsed or refractory follicular or diffuse large B-cell lymphoma. NLM identifier: NCT02257567.