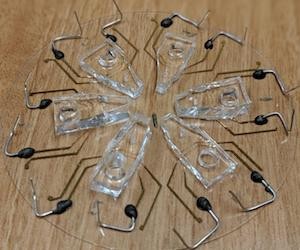 Six of the devices with biosensors.

"Our technology combines artificial intelligence and sophisticated biosensors that handle tiny amounts of fluids to see if cancer cells are sensitive or resistant to chemotherapy drugs," commented Mehdi Javanmard, PhD, Assistant Professor of Electrical and Computer Engineering at Rutgers University–New Brunswick and senior author of the study, which has now been published in Microsystems & Nanoengineering.

The researchers, who are from the Rutgers Department of Electrical and Computer Engineering and the Rutgers Cancer Institute of New Jersey, created a device that works for a promising form of targeted therapy, anti-matriptase–conjugated drugs, which target "activated" matriptase, a protease that is overexpressed in a variety of epithelial cancer cells, including those of B-cell lymphoma, multiple myeloma, and epithelial carcinomas.

"Cell sensitivity to drug can be assessed by qualitatively analyzing the surface markers on the tumor cells to determine whether the targeted therapy will be effective or not," explain the researchers, led by first author Karan Ahuja, MS EE, who completed the research as a graduate student in Electrical and Computer Engineering at Rutgers. "Cells sensitive to the anti-matriptase–conjugated drug will undergo apoptosis (cell death), while the cells which are insensitive to the drug will remain alive."

The device features a microfluidic channel placed on a glass wafer with gold electrodes, a multifrequency lock-in amplifier, and software that records and then analyzes the data.

The researchers conducted experiments using T47D cancer cells, T47D cancer cells treated with target drug, and T47D dead cancer cells, measuring electrical impedance cytometry—impedance being the resistance that the cells present to electrical current when voltage is externally applied—at four discrete frequencies ranging from 300 kHz to 30 MHz. They found that their device performed with up to 95.9% accuracy.

Current methods of automated analysis of cell viability that are commercially in use employ staining, which "fundamentally limits the subsequent characterization of these cells as well as downstream molecular analysis," write the researchers, noting that their new method only requires 20 µL of volume and avoids staining so that further molecular analysis can be done.

They emphasize the importance of their work: "To the best of our knowledge, this manuscript presents the first comprehensive attempt [at] using high-dimensional data and supervised machine learning… to assess viability of cells without staining or labelling."

Gregg Semenza, MD, PhD: The Role of HIF-1 and HIF-2 in Cancer