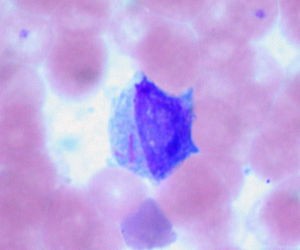 Researchers have developed a new treatment that has the potential to work powerfully for some patients with relapsed acute myeloid leukemia (AML). One of the deadliest cancers, AML has a five-year survival rate of around 30%, which drops to under 10% for elderly patients.

Around 30% of patients with AML have an activating mutation in the tyrosine kinase domain (TKD) of fms-like tyrosine kinase 3 (FLT3) or an FLT internal tandem duplication. These patients generally respond well initially to FLT3 inhibitors such as the FDA-approved midostaurin; however, they often relapse because of secondary mutations in the FLT3 TKD. Researchers at Purdue University have now developed compounds that show promise in treating not only the common FLT3 mutation but also F691 L, an FLT3 TKD mutation associated with relapse.

"These compounds have a great potential to be the next-generation AML therapeutics for relapsed patients who no longer respond to first- or second-generation FLT3 inhibitors," remarked Herman O. Sintim, PhD, Drug Discovery Professor of Chemistry at Purdue University and senior author of the study, which was published in EBioMedicine.

The researchers synthesized alkynyl aminoisoquinoline and naphthyridine compounds. When they evaluated the effects of these compounds on leukemia growth in cell cultures and mice, they found that the compounds inhibited FLT3 kinase activity even at low concentrations, and they powerfully inhibited the viability of MV4–11 and MOLM-14 AML cells. In addition, the lead compound, HSN431, inhibited Src kinase activity, which can be implicated in cancer development through the proto-oncogene tyrosine-protein kinase Src (c-Src).

"In mouse studies, almost no leukemia burden was visible after compound treatment for only a few weeks. Crucially, this new class of FLT3 inhibitor also works against drug-resistant secondary mutations, such as the problematic F691L mutation," noted Dr. Sintim.

In mice, the compounds demonstrated no signs of toxicity or significant adverse events. An advantage of the compounds is that they can be administered orally.

Dr. Sintim commented on the challenge of finding effective AML treatments: "Acute myeloid leukemia is not caused by only one mutation. It's caused by many mutations. What that means is that you might have an acute myeloid leukemia patient who would have one type of a mutation and you could have another one with another type of mutation, and you cannot give them the same drug. Even when a patient initially presents with one type of mutation, during treatment a new mutation could emerge, so to effectively treat a cancer you need to know what the aligning mutation is. This is what is called precision medicine: tailoring a drug to a particular disease driver."

Healthy Stem Cells Have as Many Mutations as Leukemic Cells