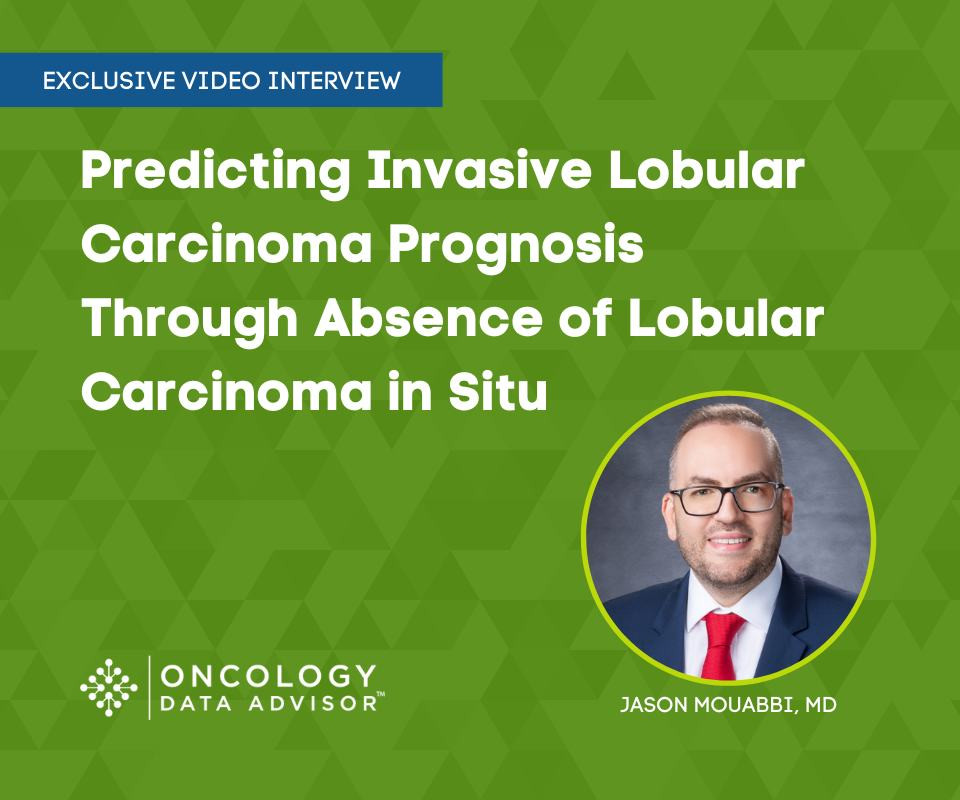 In this interview, Dr. Jason Mouabbi speaks with Oncology Data Advisor about his research regarding the absence of lobular carcinoma in situ as a poor prognostic marker in invasive lobular carcinoma, which will be presented as a poster at the 2022 San Antonio Breast Cancer Symposium (SABCS).

Dr. Mouabbi is presenting a poster at the 2022 San Antonio Breast Cancer Symposium, and today he's here to tell us a little bit more about it. Dr. Mouabbi, thank you so much for joining me today.

Jason Mouabbi, MD: Good afternoon, everyone. Today we're going to discuss one of the abstracts that will be presented at the next San Antonio Breast Cancer Symposium. It's abstract P30504. It will be presented on Wednesday, December 7th, and it's titled "Absence of Lobular Carcinoma in Situ, A Poor Prognostic Marker in Invasive Lobular Carcinoma."

Before we start talking about the abstract, I just want to do some definitions. When we talk about lobular carcinoma in situ, this is what we refer to as LCIS. This is a lobular cancer that is still confined to the walls of the lobule, so this type of cancer cannot spread because it's contained. When we talk about invasive lobular carcinoma, the word, "invasive" means it invaded the wall of the lobule. This type of lobular cancer does have malignant potential and can spread and metastasize.

In literature, about 50% of invasive lobular carcinomas, which are known as ILC, present concurrently with an ipsilateral LCIS, which means the same side. Now, whether those patients that present with co-occurring LCIS behave similarly to the patients that do not present with the co-occurring LCIS—and from now on, we're going to call them pure ILCs—whether those two groups have the same long-term outcomes is still not understood and is unknown.

The question we wanted to ask is, do patients with ILC co-occurring with LCIS have similar outcomes to pure ILCs? When we talk about outcomes, we were looking at distant recurrence-free survival. The chances of the cancer occurring outside of the breast was number one, and number two was about overall survival. Does it affect overall survival?

To answer those two questions, we started collecting data from our prospectively collected database at MD Anderson to study those two groups. Between 1966 to 2021, we identified about 4,200 patients with stage I, II, or III invasive lobular carcinoma. In our database, we found that about 45% of patients had co-occurring LCIS with ILC, and about 55% had pure ILC.

If we look at the findings of those two groups, we found that there was a statistical and numerical difference, where pure ILC tended to be associated more with more advanced size of the tumor at the time of surgery. There was more T4 disease and more N3 disease, which are more likely to have more lymph nodes involved. They also tend to have more cases that are estrogen receptor– and progesterone receptor–negative, more cases that were human epidermal growth factor receptor 2 (HER2)–positive, and more cases that had higher KI-67, which is a marker of proliferation and how active the disease is.

Also, patients had much better overall survival if they had the precursor LCIS present, about 19 years compared with 14 years in the patients who had pure ILCs. That corresponded to hazard ratio of 0.62, and that was also statistically significant. When we found that data, we decide to do what we call a multivariate analysis to see if the presence or absence of LCIS is an independent prognostic factor. Sure enough, we found that the absence of LCIS is an independent poor prognostic factor for distant recurrence-free survival and overall survival.

Now, of course those findings were very provocative, and we went around and tried to find a hypothesis which tried to justify what we found. Our working hypothesis is that it is likely that all invasive lobular carcinoma arose at some point from LCIS. At the time of diagnosis, if there was only pure ILC, that reflects on the tumor aggressiveness. It might indicate that the clone of lobular cancer is so aggressive that all the precursor lesions have been transformed to the invasive type, and that's why we cannot find any of the precursor lesions. Whereas in the patients where you can still see the precursor lesion along with the invasive component, this is more often indolent, slower-growing, less-aggressive disease. This is our working hypothesis, and it can really describe what we found.

But again, our study is limited because it's one center, only our institution at MD Anderson. More studies are warranted at other institutions, and more prospective studies are also warranted to confirm what we found. Now, another thing with this study that we would love to highlight is that because there is currently this big debate about the importance of the precursor LCIS, a lot of centers do not even report them or look for them when they're looking at the pathology. After what we found, it's really important for the pathologists to always look for those precursor lesions, and if they are found, to report them in their pathology report.

We truly believe that in the future, this is going to be one of the variables that can determine how aggressive the tumor is and how aggressive we need to be in treatment. So, this is one of those exciting aspects that we'll be presenting. Again, it's being presented on Wednesday, December 7, and we're looking forward to seeing you all there.

Oncology Data Advisor: Great, thank you so much for explaining more about this. I'm looking forward to talking again after the symposium to hear more about what was presented there.

Jason Mouabbi, MD, is an Assistant Professor in the Department of Breast Medical Oncology at The University of Texas MD Anderson Cancer Center, where his research focuses on the management of breast cancer subtypes and their impact on treatment, with specific specialization and interest in lobular breast cancer. Dr. Mouabbi has been the recipient of multiple honors and awards, including the Guiding Researchers and Advocates to Scientific Partnerships (GRASP) Advocate Choice Award in 2022 and the Lester & Sue Smith Breast Cancer Award of Excellence in 2021.