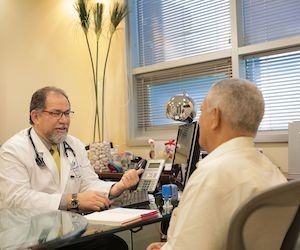 A new study reports that only 62.1% of US patients with lung cancer receive treatment that adheres to guidelines, and elderly and non-Hispanic black patients are disproportionately represented among those whose cancer is undertreated.

For the study, now published in Annals of the American Thoracic Society, the researchers evaluated whether 441,812 lung cancer cases in the US National Cancer Database diagnosed between 2010 and 2014 received treatment that adhered to the National Comprehensive Cancer Network (NCCN) Guidelines. Using multivariable logistic regression models, the investigators analyzed possible disparities by racial/ethnic group and by age across all clinical subgroups, adjusting for characteristics of the patient, tumor, and health care provider.

"These results indicate that SBRT is indeed used as an alternative guideline-concordant treatment for [localized] NSCLC cases which have contraindications for surgery," remark the investigators, led by first author Erik F. Blom, MD, and senior author Harry J. de Koning, MD, PhD, both of the Department of Public Health at Erasmus MC University Medical Center in Rotterdam, the Netherlands. "However, especially in other clinical subgroups, efforts should be made to ensure that elderly patients receive the minimal recommended treatment."

In a finding that aligned with results of earlier studies, non-Hispanic blacks were also less likely to receive guideline-adherent treatment compared with non-Hispanic whites, including surgery for localized NSCLC and chemotherapy for advanced NSCLC, with an adjusted odds ratio of 0.78. These disparities persisted across every clinical subgroup of NSCLC. Interestingly, the researchers found that Hispanics were less likely to receive guideline-recommended treatment overall but were more likely to receive surgery for localized NSCLC.

The investigators note that because they were unable to take patient preferences into account, they "cannot draw firm conclusions" regarding the causes underlying these disparities.

"Efforts should be made to decrease the proportion of cases that receive no treatment or less intensive treatment than recommended," write the authors. "Specifically, patterns of care among those receiving less intensive treatment than recommended suggest room for an improved uptake of SBRT among [localized] NSCLC, multimodality therapy among [locally advanced] NSCLC and [limited-disease] SCLC, and chemotherapy among metastatic disease."

The researchers conclude by emphasizing the applicability of their findings: "This knowledge may be used to target interventions for improving the rate of lung cancer cases that receive guideline-concordant treatment and to reduce disparities."