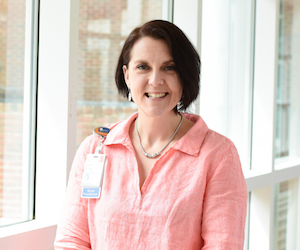 ​Lung cancer screening using low-dose computed tomography (CT) has been endorsed by the United States Preventive Services Task Force and is covered by most insurances, yet this service is still underutilized, and some individuals at high risk for lung cancer may not know that it exists. Aimee Strong, MSN, AGACNP-BC, investigated whether social media could be used to educate high-risk individuals about lung cancer screening and motivate them to discuss screening with their health care providers. At the Oncology Nursing Society 44th Annual Congress in Anaheim, California, i3 Health spoke with Mrs. Strong about her study and the implications of her results.

What led to your research in this area?

Aimee Strong, MSN, AGACNP-BC: I have worked in surgical oncology for many years. The last four years were spent working in thoracic surgery, where the majority of my patients had lung cancer. In 2015, I developed and launched a lung cancer screening program within the health system where I was working. I found that despite insurance coverage for lung cancer screening, there were not a lot of referrals. I felt that part of this was that patients were not aware of screening, nor were they aware that it was a covered benefit under Medicare and most commercial insurances.

Later, as part of my doctoral program, I was able to delve deeper into this and explore the use of social media, specifically Facebook and YouTube, to reach patients and educate them about lung cancer screening. I wanted to see if I could harness social media as a tool for patient education surrounding lung cancer and see if this was a way to increase knowledge. Additionally, I was interested to see if patients who completed the education were motivated to then discuss lung cancer screening with their health care provider.

What do you think are the main barriers that keep high-risk patients from getting screened for lung cancer?

I think that foremost, patients are unaware that screening exists and that it is covered by their insurance. Secondly, I do not think that a lot of primary care physicians are aware of lung cancer screening. There is also a lot of stigma associated with lung cancer and smoking. Patients often feel guilty about smoking and may have had negative experiences with health care in the past related to their smoking. The last thing that many smokers want to hear is that they should quit. They know this; however, the tobacco companies have done a great job at making cigarettes highly addictive. Another barrier is access to care. There are many rural areas that do not have lung cancer screening programs or even facilities for CT. This makes it very difficult for patients to get the care that they need for their diabetes and hypertension, much less lung cancer screening.

What was your experimental approach?

I developed a Facebook ad that targeted people within Virginia, ages 55-77, who were current smokers or had quit within the past 15 years and had at least a 30-pack-year smoking history. Those that have or had lung cancer or that had undergone lung cancer screening were excluded. Using my defined criteria, Facebook was able to place my ad on their users' Facebook feed. Interested subjects clicked on the link in the ad, which took them to the study page on Facebook.

They then filled out some info, took the LCS-12 lung cancer screening knowledge tool (used with the permission of Dr. Robert Volks at MD Anderson) and then watched a short video I made that was hosted on a secure YouTube channel. Next, they took the posttest and rated their level of motivation to discuss lung cancer screening with their health care provider.

What were your findings?

Thirty-one subjects completed the study. There was a statistically significant increase in knowledge about lung cancer screening after watching the video (P=0.001). The mean motivational level "to discuss lung cancer screening" on a Likert scale of 1 ("very unlikely") to 5 ("very likely") was a 3.52, with a mode of 5.

This shows that social media can be used as a platform for educating patients about lung cancer screening and can potentially be used to educate individuals about other health topics as well.

What can be done to implement the results of your research?

Health care providers should consider using social media as a way to engage patients in health topics and screenings. Providers could develop Facebook or YouTube pages with various health topics that patients could review in the privacy of their home.

What advice can you give to nurses as they treat patients with lung cancer and those at high risk of lung cancer?

I think that we need to talk more about lung cancer and screening. It should be as routine a conversation as talking about mammography and colonoscopy and prostate-specific antigen (PSA) testing.

Aimee Strong, MSN, AGACNP-BC, is a Board-Certified Adult-Geriatric Acute Care Nurse Practitioner presently working in the Lung Cancer Screening Program at the University of Virginia in Charlottesville, Virginia. Prior to joining UVA, Mrs. Strong worked at Centra Medical Group in Lynchburg, Virginia, and developed the first comprehensive lung cancer screening program in central and southside Virginia. She began her nursing career with an Associate's Degree in Nursing in 1995, completed her Bachelor's in Nursing at Virginia Commonwealth University in 2009, and received her Master's Degree in Nursing from the University of Virginia in 2013. In May, she will complete her Doctorate in Nursing Practice from Old Dominion University. Her doctoral research focuses on using social media as a platform for patient education about lung cancer screening. Mrs. Strong's clinical interests include cancer prevention, health promotion, and combatting the stigma associated with smoking and lung cancer. 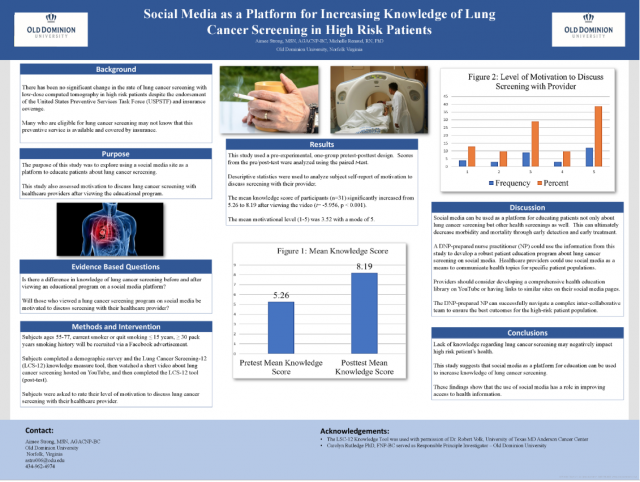