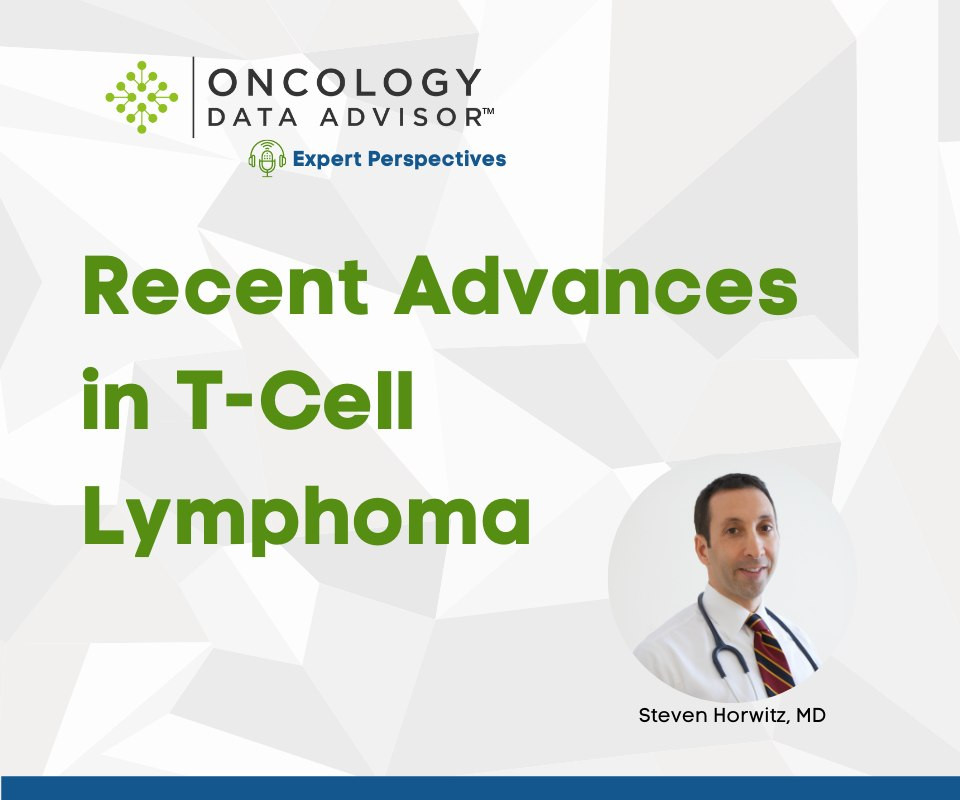 Welcome to Oncology Data Advisor, where we explore the latest advances in cancer research and treatment. I'm Keira Smith.

In this podcast, Dr. Steven Horwitz from Memorial Sloan Kettering Cancer Center will be discussing recent advances in the treatment of T-cell lymphoma. Thank you for joining us, Dr. Horwitz.

Keira Smith: What do you consider some of the most challenging aspects of managing patients with T-cell lymphoma?

Dr. Horwitz: T-cell lymphomas are complicated, and there are a couple of main points, I think. One is accurate diagnosis. There are almost 30 different subtypes of T-cell lymphoma. As we develop additional better therapies, subtype often matters. I think one of the things is just making sure we have the correct diagnosis, or the closest diagnosis or clearest description, to give you the best chance of making the best treatment choices. That's an initial challenge.

I'd say the second thing is that we just don't have enough effective therapies. Standard therapies can cure a proportion of people, but outside of that, we really have treatments that only work some of the time. Sometimes the challenge is finding the optimal therapy for each person and keeping disease under control. Those are the main challenges.

Keira Smith: Given the data showing the benefit of consolidative stem cell transplant following brentuximab vedotin plus CHP (cyclophosphamide/doxorubicin/prednisone), what considerations go into determining which patients are eligible for this?

Dr. Horwitz: It's a good question. Transplant for T-cell is a little bit controversial. There are some larger retrospective studies that show that it's not clearly beneficial. Just to clarify here, we're talking about autologous transplant as consolidation for first remission, which is different that relapsed disease, of course. When we've looked at some other prospective phase 2 studies or prospective registries, and similarly with the ECHELON-2 study, none of those are randomized comparisons. But when we look, it appears that the patients who achieve a complete remission to initial chemotherapy—and that's been variably defined as by computed tomography (CT) or by positron emission tomography (PET)—are the patients who appear to benefit. That's the best data we have; but again, it's a little bit controversial.

When we look at our data and those other datasets, patients who are primary chemotherapy–refractory or who have a lack of remission probably do not benefit. Those who achieve PET-negative status or get a first complete remission look like they're the ones who are most likely to benefit. That's the basic decision point. Then we look at things like the risk of the transplant. What are their comorbidities? Are they likely to have significant side effects with the transplant, eroding the chance of benefit? Those are most of the factors, and we apply that approach or offer that approach to most patients with anaplastic lymphoma kinase (ALK)–negative anaplastic large cell lymphoma, angioimmunoblastic T-cell lymphoma, and peripheral T-cell lymphoma not otherwise specified. There are a group of patients with the more favorable ALK-positive anaplastic large cell lymphoma without high-risk disease, and these patients usually do well with standard therapy alone.

Keira Smith: Some of the adverse events associated with brentuximab vedotin are peripheral neuropathy, neutropenia, and febrile neutropenia. Would you recommend granulocyte-colony stimulating factor (G-CSF) prophylaxis for these patients?

Otherwise, the main side effect we see is neuropathy, and that can be cumulative from cycle to cycle. Kind of like with other upfront therapy, we're giving relatively dose-intense therapy to try and achieve a cure. In that sense, we're not planning on treating people with 16 cycles of brentuximab for long-term treatment. We don't want to leave people impaired with their neuropathy, but usually we will try to push through at least grade 1 and maybe early grade 2, particularly if there are only some sensory changes and no functional impairment. It's the idea that if we just get them through six cycles, we're done with therapy, and if they're cured, we never have to circle back to treatments again. The way the study was done, though, if patients progressed to grade 2 neuropathy, they would have a dose hold or dose reduction. I would say that would be standard—we do, although, look at how bad the neuropathy is and how close they are to finishing the treatment, and then we decide about reducing the brentuximab or holding it.

Keira Smith: For patients with cutaneous T-cell lymphoma (CTCL), is there a rationale for adding mogamulizumab as a secondary agent to extracorporeal photopheresis early in disease?

Dr. Horwitz: It's an interesting question. As far as I know, there's no data on that. We think extracorporeal photopheresis is a very basic way of stimulating the immune system against the cancer cells in the blood. The cell are taken out and exposed to psoralen, mixed with ultraviolet light, which we know can kill CTCL cells and then they're given back to the patient. We think that it creates an immune response against the antigen. The idea is if we're creating an immune response, can we enhance that immune response with mogamulizumab? I think it is a reasonable question. There may be studies going on, but I don't know of any data yet.

Along those same lines, there is a national study through the National Cancer Institute (NCI) that we and others are participating in, giving mogamulizumab with an anti-CD47 antibody, magrolimab. The mogamulizumab binds to the CCR4 on the tumor cells, and the anti-CD-47 antibodies block the "don't eat me" signal," so that is another way of giving an antibody to target the tumor, as well as giving an immune stimulator—in this case, an anti-CD47 antibody. That's an ongoing clinical trial with a similar concept. It's a long way of saying "I don't know," but I think the idea of enhancing immune responses to achieve higher response rates and longer responses is probably a good idea, as one of the issues with CTCL is that we don't tend to get very durable remissions from therapy. If we could really create an autologous immune effect against the tumor cells, then we would have the possibility of creating some more durable benefit.

Keira Smith: Well, thank you so much, Dr. Horwitz, for joining us and sharing all this valuable information with us.

Thank you for listening to Oncology Data Advisor. Be sure to subscribe to the podcast so you'll never miss an episode! In addition to our podcast, the Oncology Data Advisor site features expert perspectives and news stories on the latest in cancer research and treatment, all found at oncdata.com.

Steven Horwitz, MD, is a medical oncologist at Memorial Sloan Kettering Cancer Center. He specializes in the treatment of patients with lymphoma, with particular expertise in T-cell lymphoma. Dr. Horwitz's research is centered on the development of novel therapies for patients with these diseases, and he has served as an investigator of numerous clinical trials. He serves on the Executive Committee of the International T-Cell Registry, on the Board of Directors of the Cutaneous Lymphoma Foundation, and as Chair of the T-cell and Cutaneous Lymphoma Guidelines Panel for the National Comprehensive Cancer Network Lymphoma Committee.

Clinicaltrials.gov (2021). Testing the addition of an anti-cancer drug, Hu5F9 (magrolimab) to the usual chemotherapy treatment (mogamulizumab) in T-cell (a type of immune cell) lymphoma that has returned after treatment or does not respond to treatment. NLM identifier: NCT04541017.

This transcript has been edited for clarity. Any views expressed above are the speaker's own and do not necessarily reflect those of i3 Health.re ... 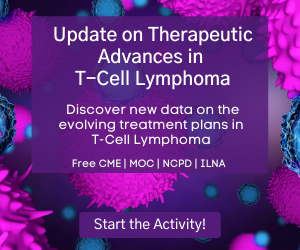