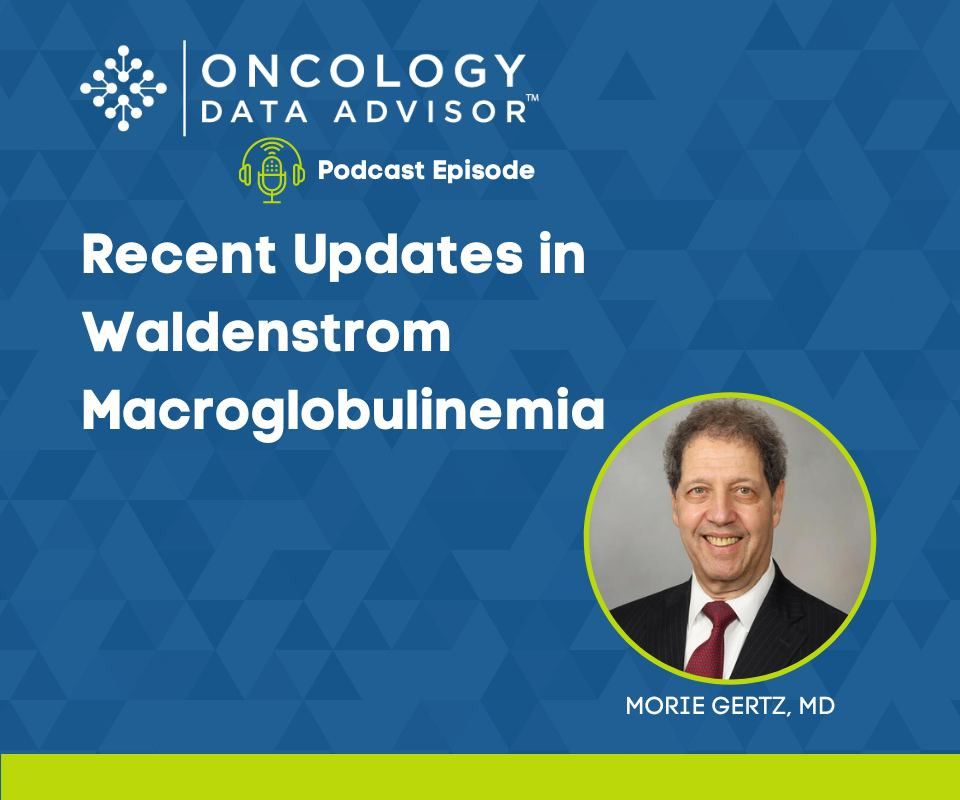 In January 2022, Dr. Morie Gertz, Professor and Chair of General Internal Medicine at the May Clinic in Minnesota, served as faculty for the Waldenstrom macroglobulinemia session of the Oncology Data AdvisorTM Hematologic Malignancies Symposium. With several significant updates in the treatment and management of WM since then, Dr. Gertz sat down with Oncology Data Advisor again to share all that has occurred in this evolving field.

Oncology Data Advisor: Welcome to Oncology Data Advisor. Today, I am joined by Dr. Morie Gertz from the Mayo Clinic in Minnesota. Last year, Dr. Gertz chaired an activity for i3 Health focusing on Waldenstrom macroglobulinemia. Today, he's here to talk about the updates in the field that have occurred since then. Dr. Gertz, thank you so much for being here today.

Oncology Data Advisor: Since this activity was recorded last January, what are the additional advances in WM research that have occurred?

Dr. Gertz: I think that one of the most important things was an abstract that was presented at the American Society of Clinical Oncology (ASCO) Annual Meeting. This was a multicenter study where they solicited outcomes, retrospectively, from centers across the globe. The intent of the trial was to compare rituximab/bendamustine (R-bendamustine) with ibrutinib. When they went through all of it, although the rituximab/bendamustine tended to have a higher percentage of very good partial responses, the key criteria—which were the progression-free survival and the overall survival—were actually identical between the two.

Since rituximab/bendamustine and ibrutinib are the two biggest first-line therapies, the decision isn't really made on efficacy. It's generally made based on reviewing with the patient the side effects of the different regimens and then really discussing with them whether they would prefer a time-limited treatment that's intravenous, or an indefinite therapy going forward, but that is oral. I think it was a really important finding to indicate that you really have choices in first-line therapy that can incorporate patient preferences.

There are a couple of other things that have occurred. There was a trial that was looking at the combination of venetoclax plus ibrutinib. Accrual to that was suspended due to some early mortality, pending an investigation to determine if it is or is not related to the regimen itself. It's important to recognize that venetoclax is actually a very active treatment in macroglobulinemia, and I suspect it will be used as a first line competitor relatively soon. But whether it's safe to combine venetoclax with other highly active regimens remains unclear. The other thing that is recognized is the fact that viscosity, which occurs in about 10% to 15% of Waldenstrom patients, has no impact on outcome or on survival.

There was a long-term update on the use of rituximab, cyclophosphamide, and dexamethasone. It's an oldie but a goodie. It's the type of regimen that is widely available globally. Although it has a little bit more toxicity than R-bendamustine, it turns out that it's actually an extremely effective regimen and should still be considered a legitimate option for those patients with Waldenstrom.

Oncology Data Advisor: This is great. Thank you so much for sharing everything, and we're definitely looking forward to hearing more updates.

Hear more from Dr. Gertz in Treatment Advances in Waldenstrom Macroglobulinemia, an accredited activity on i3Health.com!

Morie Gertz, MD, is the Roland Seidler Jr. Professor in the Department of Medicine and Chair of General Internal Medicine at the Mayo Clinic in Rochester, Minnesota. He specializes in the treatment of patients with Waldenstrom macroglobulinemia, amyloidosis, and multiple myeloma, including those undergoing stem cell transplantation. Dr. Gertz serves as a member of the American Board of Internal Medicine's Hematology Approval Committee, and he has authored or coauthored more than 700 manuscripts focusing on research for hematological malignancies.