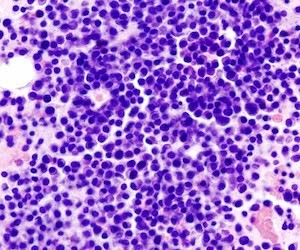 A combination of oral selinexor and dexamethasone shows objective responses in patients with multiple myeloma that is refractory to three different classes of currently available therapies, report the investigators of the phase 2b STORM study.

''An increasing number of patients have triple-class refractory myeloma, defined as disease refractory to proteasome inhibitors, immunomodulatory agents, and monoclonal antibodies," write the researchers in their publication in The New England Journal of Medicine.

The study investigated the treatment of patients who had been "penta-exposed," exposed to five currently available multiple myeloma treatments from these three classes: carfilzomib, bortezomib, lenalidomide, pomalidomide, and daratumumab. What happens to patients once have they become refractory to all of these treatments?

"Overall survival in patients with myeloma refractory to these classes is short," write the investigators, led by first author Ajai Chari, MD, Associate Professor of Hematology and Medical Oncology at Mount Sinai, where he is also Director of Clinical Research in the Multiple Myeloma Program and Associate Director of Clinical Research in the Cancer Clinical Trials Office. "Patients with daratumumab-refractory myeloma have a median overall survival of 1.7 to 3.0 months. Currently, these patients have no treatment options with proven clinical benefit."

The STORM study enrolled patients with multiple myeloma previously exposed to bortezomib, carfilzomib, lenalidomide, pomalidomide, daratumumab, and an alkylating agent. Patients' disease needed to be triple-class refractory: refractory to at least one proteasome inhibitor, one immunomodulatory drug, and daratumumab. Between the United States and Europe, 122 patients were included in the modified intention-to-treat population, which was used for the primary analysis, and 123 were included in the safety population. Of the patients, who had a median age of 65 and a median of seven prior regimens, 53% had high-risk cytogenetic abnormalities.

Patients received 80 mg of oral selinexor plus 20 mg of dexamethasone twice weekly, for a primary end point of overall response (at least a partial response) and a secondary end point of clinical benefit, consisting of a minimal response or better.

Selinexor/dexamethasone produced an overall response rate of 26%, including 2 stringent complete responses, with a median response duration of 4.4 months, median progression-free survival of 3.7 months, and median overall survival of 8.6 months. At least a minimal response was seen in 39% of patients. Among patients who experienced a response, efficacy was consistent across trial subgroups, including the subgroup of patients with high-risk cytogenetics.

"Given the rapid progression of penta-exposed, triple-class refractory myeloma, the window of opportunity to prevent further illness and death is small. Therefore, the regimen that was used in the STORM study began with a high dose of selinexor to achieve rapid disease control," write Dr. Chari and colleagues. "Thrombocytopenia… was reversible and was managed with dose interruptions and thrombopoietin-receptor agonists."