Shortfall in Knowledge of Treatment Optimization for Castration-Resistant Prostate Cancer 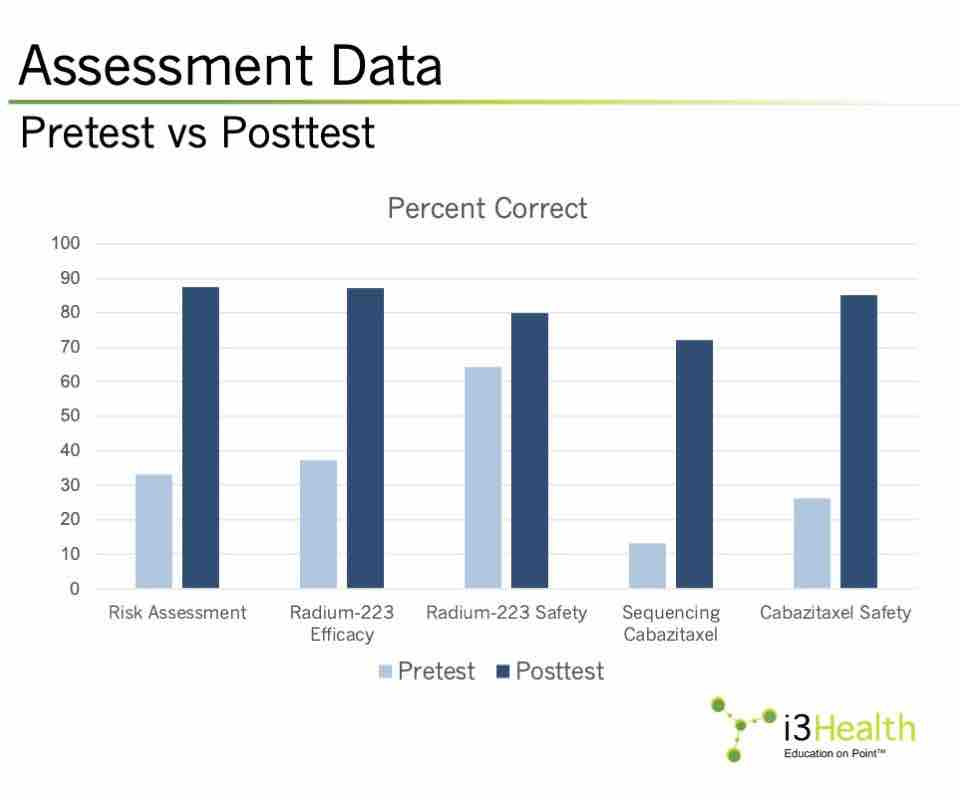 Prostate cancer is the tumor type with highest incidence in men in the United States. Typically, the first line treatment for progressive disease is androgen deprivation therapy (ADT). However, most men eventually stop responding to ADT treatment and develop castration-resistant prostate cancer (CRPC). The therapeutic options for this highly heterogeneous disease process have expanded to include novel hormone therapies, second-generation taxanes, immunotherapy, and bone-targeted and bone metastasis-targeted agents. Metastatic CRPC is the primary cause of prostate-related mortality.

The activity was presented as a satellite symposium at the Oncology Nursing Society Congress on April 12, 2019, to 156 learners, and an additional 330 learners viewed the content available online from May 1, 2019, to April 30, 2020. The majority of learners (90%) were registered nurses, followed by nurse practitioners (4%), advanced practice nurses (2%), individuals who selected "other" for their profession (2%), pharmacists (1%), and two physicians. Participants had a wide range of practice experience, ranging from less than five years to over 20 years, and they saw an average of ten patients with CRPC per month. Learners were given a pretest prior to beginning the activity and a posttest consisting of the same questions following the activity's conclusion. Of the 486 learners who took the pretest and began the activity, 436 saw it through to completion.

The baseline assessment demonstrated a significant shortfall in knowledge of novel combination and sequential treatment strategies for CRPC and the efficacy and safety of these treatments. Only 13% of learners knew the correct treatment sequence of docetaxel, cabazitaxel, and abiraterone for metastatic CRPC; only 26% of learners could identify the most likely adverse event of cabazitaxel treatment; only 33% of learners could identify that 15.9 months was the incorrect risk of disease progression for a patient with nonmetastatic disease treated with ADT; and only 37% of learners could correctly predict that a patient with CRPC and bone metastases would have an overall survival of 14.9 months after radium-223 treatment. However, a higher proportion (64%) of learners recognized that radium-223 treatment should be discontinued if the patient's hematologic values do not recover within 8 weeks.

Significant learning took place during the activity with respect to all topics as revealed by the learners' performance on the posttest. Learners demonstrated a nearly 60% improvement in knowledge of treatment sequencing: a higher proportion of learners now knew that docetaxel/cabazitaxel/abiraterone significantly improves overall survival compared with docetaxel/abiraterone/cabazitaxel for metastatic CRPC (72% vs 13%). Almost 50% more learners (85% vs 26%) could identify diarrhea as the most likely adverse event of cabazitaxel treatment. Slightly more learners, 55% (87% vs 33%), correctly identified that 15.9 months was not the median time until nonmetastatic disease progression during treatment with ADT. The median time to progression on ADT for nonmetastatic disease is 33.2 months; 15.9 months is the median time for metastatic disease progression on ADT. Furthermore, 50% more learners (87% vs 37%) correctly predicted that a patient with CRPC and bone metastases would have an overall survival of 14.9 months after radium-223 treatment, and 20% more learners (80% vs 64%) could now recognize that radium-223 treatment should be discontinued if the patient's hematologic values did not recover within eight weeks.

Learners' performance on the pre- and post-activity assessment suggested that their competence improved regarding CRPC risk assessment, efficacy and safety of emerging therapies, and treatment sequencing. i3 Health has determined that the multidisciplinary team may benefit from future NCPD–approved activities that provide further and updated CRPC education.

Upon completion of the activity, 98% of participants felt more confident in treating their patients with CRPC, and 98% felt that the material presented would be used to improve the outcomes of their patients.

Expertise and Knowledge Gains Made for Treatment of Prostate Cancer