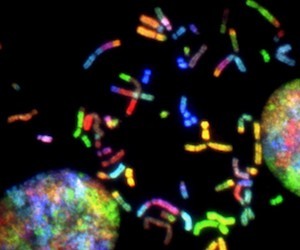 Microsatellite instability is caused by mismatch repair (MMR) deficiencies, which result from the inactivation of DNA repair genes essential to resolving base-to-base mismatches of nucleotides during DNA replication. Germline mutations in MMR genes are responsible for Lynch syndrome, which predisposes individuals to cancer, causing a lifetime risk of colorectal cancer and other tumors such as endometrial and gastric carcinoma. In addition, nonhereditary cases of colorectal cancer often exhibit MSI. There is an aspect of hope in that MSI-H tumors have increased immunogenicity, making them more amenable to therapy with immune checkpoint inhibitors than microsatellite-stable tumors often are; however, there are no targeted therapies that directly exploit tumors' MMR deficiencies.

"Targeted cancer therapy is based on exploiting the biological systems that tumor cells, but not healthy tissues, rely on for survival," stated Simon Wöhrle, PhD, Principal Scientist at Boehringer Ingelheim Regional Center Vienna (RCV), Austria, and co-senior author of the study, which has now been published in eLife. "Before we can develop new treatments against MSI-H cancer cells, we first need to understand what it is that helps them to survive and thrive."

Werner syndrome helicase is a member of the RecQ DNA helicase subfamily, which is involved in multiple DNA processing steps such as replication, repair of double-strand breaks, transcription, and the maintenance of telomeres. The researchers found that inactivating WRN impairs MSI-H colorectal and endometrial cancer cell lines, but it does not impair microsatellite-stable ones. The researchers found that in MSI-H cells, loss of WRN results in severe genomic defects.

The scientists' investigations indicated that the dependence on WRN demonstrated only by MSI-H cells and not by microsatellite-stable ones is not due to the acute loss of MMR gene function itself; instead, it may come about during a period of sustained MMR deficiency.

According to co-senior author Mark Pearson, PhD, MSc, Vice President at Boehringer Ingelheim RCV, the researchers' discoveries concerning the role of WRN in MSI-H cancers presents an opportunity for new treatments: "Our results indicate that pharmacological inhibition of WRN function might serve as a novel targeted therapeutic strategy in MSI-H cancer to help meet demand for more effective drugs."

FDA Approves Nivolumab With Chemotherapy for Gastric and Esophageal Cancer