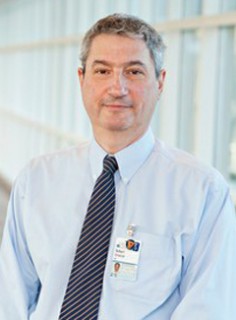 Prostate cancer is the most common tumor type in men in the United States. Typically, androgen deprivation therapy (ADT) is administered for progressive disease. However, castration resistance or unresponsiveness to ADT or to antiandrogens frequently develops over time. The transition from castration-sensitive to castration-resistant disease has yet to be understood and represents a significant unmet need. Metastatic castration-resistant prostate cancer (CRPC) is the primary cause of prostate-related mortality, accounting for an estimated 26,730 deaths annually. In this Q&A session, Robert Dreicer, MD, deputy director of UVA Cancer Center, discusses recent developments, treatment selection considerations, and the importance of genetic testing for individual patients with CRPC.

What are the benefits of newer, continuous treatments compared with cyclical, intermittent treatments such as androgen-deprivation therapy (ADT) for 6 months followed by 6 months off?

Robert Dreicer, MD: For metastatic prostate cancer, the concept of intermittent ADT has been addressed by one very large US randomized trial. Although that trial is difficult to interpret, the way most of us interpret it, including senior author Maha Hussain, is that it was a non-inferiority study and that patients have the best survival with continuous therapy.

The other way to think about cyclical therapy is that investigators at Johns Hopkins and a few other institutions have been using cyclical repletion of testosterone with sequencing therapy. Those studies have actually been disappointing. But your question is the more conventional one. Do I use intermittent therapy? In a very select patient group. I tell people that based on the data, continuous therapy appears to improve survival.

What is the indication for treating elevated PSA without metastatic disease? How high should the PSA be to initiate ADT?

Dr. Dreicer: I tell those patients that most patients with biochemical failure don't die of prostate cancer. I check their PSA every three months and I use PSA doubling time. I go to the Memorial Sloan Kettering Cancer Center website, plug in my 3 or 4 values, and tell them that when their PSA doubling time drops below 6 to 8 months, I'm going to use conventional imaging. If they have metastatic disease, I'm going to treat them. If they don't have metastatic disease, that's my new set point.

Having been a genitourinary (GU) oncologist for 30 years, testosterone suppression is not a benign thing. When you suppress testosterone in a patient, most gain between 10% to 15% of their body weight in the first year. There's also a dramatic increase in metabolic syndrome and diabetes. Most people don't die of prostate cancer, but they do die from cardiovascular disease and diabetic complications. So, in the absence of metastatic disease, there really is no compelling data to use testosterone suppression.

Now, what does that take? You need to believe that and you need to want to spend the time with the patients. Because I can tell you, I spent 16 years at the Cleveland Clinic and my urologic colleagues, who I love to death, sent every biochemical-failure patient to GU medical oncology. Why? Because they knew we'd have the conversation with the patient.

If you do not want to spend the time talking when taking care of thousands of patients with PSA failure, it's much easier to say, "Turn around, let me stick you with something and we're going to make your PSA go down." Everybody's happy, right? Because PSA is a number. People get worried about numbers, but the implications are rarely talked about in terms of the therapy and the side effect profile.

Now, that's my bias, but I'd also challenge you to show me prospective evidence that ADT in the PSA failure settings shows a survival benefit.

Why don't we use DES (diethylstilbestrol) anymore?

Dr. Dreicer: Diethylstilbestrol used to be the medical therapy for prostate cancer, and it worked. The dose that was typically used was anywhere from 3 to 5 mg. There were studies done by the UVA prostate cancer group a long time ago which showed that these therapies were equivalent to bilateral orchiectomy.

As you might imagine, estrogen in men can cause cardiovascular disease, and it did. But interestingly enough, there was an econ-led randomized trial of 1 mg of DES that was presented at ASCO. It works. If you could get it made at a compounding pharmacy, 1 mg of DES costs about 2 to 3 cents. By then, LHRH (luteinizing hormone releasing hormone) agonists had been developed. Do you know how much an LHRH agonist costs if you give it every 3 months? It's more than $10,000, depending on where you are and the market. It can be $20,000. Who do you think won?

The last time I prescribed DES was probably 15 years ago. The reality is patients will read about estrogen and ask me to tell them that 1 mg of DES is not going to increase their risk of vascular disease, and I can't.

Who do you do germline BRCA testing on? When do you do somatic testing?

Dr. Dreicer: I do germline testing on patients who are younger than 65 and present with de novo metastatic disease. I do somatic testing on pretty much anyone who hasn't had germline testing who has what I call worrisome clinical presentations: the patient who has 8 months of response to testosterone suppression and is now progressing, the patient who presents with liver metastases, and other atypical things that suggest either neuroendocrine differentiation or different biologic behavior.

Do I think that I will eventually be testing everybody? I do. If a quarter of metastatic CRPC patients have a BRCA mutation, you have to know.

You mentioned neuroendocrine differentiation. Do you biopsy patients who have metastatic prostate cancer with liver metastases?

Dr. Dreicer: I'll tell you what I almost always do, and then what I have done recently because of new developments. Historically, I stopped. I would just treat those patients with platinum-based chemotherapy. I did that because when you stick needles in a lot of these patients you'll get admixtures of adenocarcinoma. Sometimes you'll see small cells, and sometimes you won't. So, I stopped doing biopsies on these patients.

The most recent patient I had was a 53-year-old man who presented with de novo metastatic disease and extensive bone disease. He was administered ADT and cycle 4 of docetaxel. When he came in, his hemoglobin dropped 3 grams and he was hunched over, so I think he has both small cell and possibly a targetable mutation. Instead of saying, "I'm going to accept the tissue," I did both. I did a biopsy and sent it for next generation sequencing. It turns out that he did have small cell and a BRCA tumor. He received platinum therapy and had a very nice response that lasted for 6 cycles. Now, he's progressing. I'm going to try to get him a PARP inhibitor, but the likelihood is he'll blow right through that. Anecdotally, patients that I've treated with platinum therapy and then given a PARP inhibitor do not respond. I think it's because it's the same target.

Robert Dreicer, MD is deputy director of UVA Cancer Center, serves as the director of solid tumor oncology within the division of hematology/oncology, and is a Professor of Medicine and Urology. Dr. Dreicer's research interests are in the novel therapeutic approaches for urologic cancers including prostate, urothelial, and kidney cancers. He is co-chair of the National Cancer Institute's Genitourinary Oncology Steering Committee and serves as member of the Medical Oncology Test Writing Committee of the American Board of Internal Medicine. In addition, he is a member of the Scientific Advisory Board of the Bladder Cancer Advocacy Network.

For many years Dr. Dreicer has been named among the Top Doctors in America, America's Best Doctors, and America's Top Doctors for Cancer. He participates regularly in national and international programs devoted to education and research in urologic malignancies.

This Q&A was recorded during the live meeting, Appraisal of Recent Progress in Metastatic Castration-Resistant Prostate Cancer. Transcript edited for clarity.

Any views expressed above are the speaker's own and do not necessarily reflect the views of i3 Health.