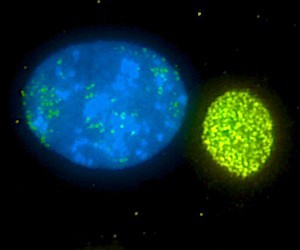 In metastatic colorectal cancer, the BRAF V600E mutation, which affects around 10% of patients, portends a poor outcome. Initial standard chemotherapy often fails, and after it does, patients survive for a median of only 4 to 6 months. A phase 3 trial reports a significant improvement in overall survival with two different treatments: a triplet therapy consisting of encorafenib (BraftoviTM, Array BioPharma), binimetinib (MektoviTM, Array BioPharma), and cetuximab (Erbitux®, Eli Lilly); and a doublet therapy consisting of encorafenib and cetuximab.

"Preclinical and clinical studies showed that the lack of efficacy of single-agent BRAF or dual BRAF and MEK inhibition in BRAF V600E–mutated colorectal cancer is related to EGFR-mediated adaptive feedback—a finding that led to the development of a combination of BRAF, MEK, and EGFR inhibition through a series of iterative studies," write the researchers in their publication in The New England Journal of Medicine, led by first author Scott Kopetz, MD, PhD, Associate Professor of Gastrointestinal Medical Oncology at The University of Texas MD Anderson Cancer Center in Houston. "Analyses of mechanisms of resistance in several studies reiterated the dependency of BRAF V600E-mutated metastatic colorectal cancer on the MAPK pathway, which is composed most prominently of KRAS, NRAS, BRAF, and MEK." For this reason, suppressing MAPK signaling through a combination of a BRAF inhibitor (encorafenib), a MEK inhibitor (binimetinib), and an anti-EGFR monoclonal antibody (cetuximab) "represented the logical therapeutic strategy to address this persistent dependency."

In this prespecified interim analysis, the triplet therapy improved both median overall survival (9.0 vs 5.4 months) and confirmed response rate (26% vs 2%) compared with control. The doublet therapy also increased median overall survival compared with control (8.4 vs 5.4 months). Grade 3 or higher adverse events were experienced by 58% of patients receiving the triplet therapy, 50% of those receiving the doublet therapy, and 61% of those in the control group.

"Despite the documented activity of the triplet regimen, resistance ultimately develops in many patients, and further characterization of these mechanisms is needed to further improve outcomes," note Dr. Kopetz and colleagues. In addition, the authors remark that since the trial was not designed to directly compare the doublet and triplet therapies, further research is needed to better determine the two regimens' relative benefits.

Nevertheless, the significant improvements in overall survival for both encorafenib/binimetinib/cetuximab and encorafenib/cetuximab in comparison with standard therapy represent a substantial step towards better outcomes for patients with BRAF V600E-mutated metastatic colorectal cancer.