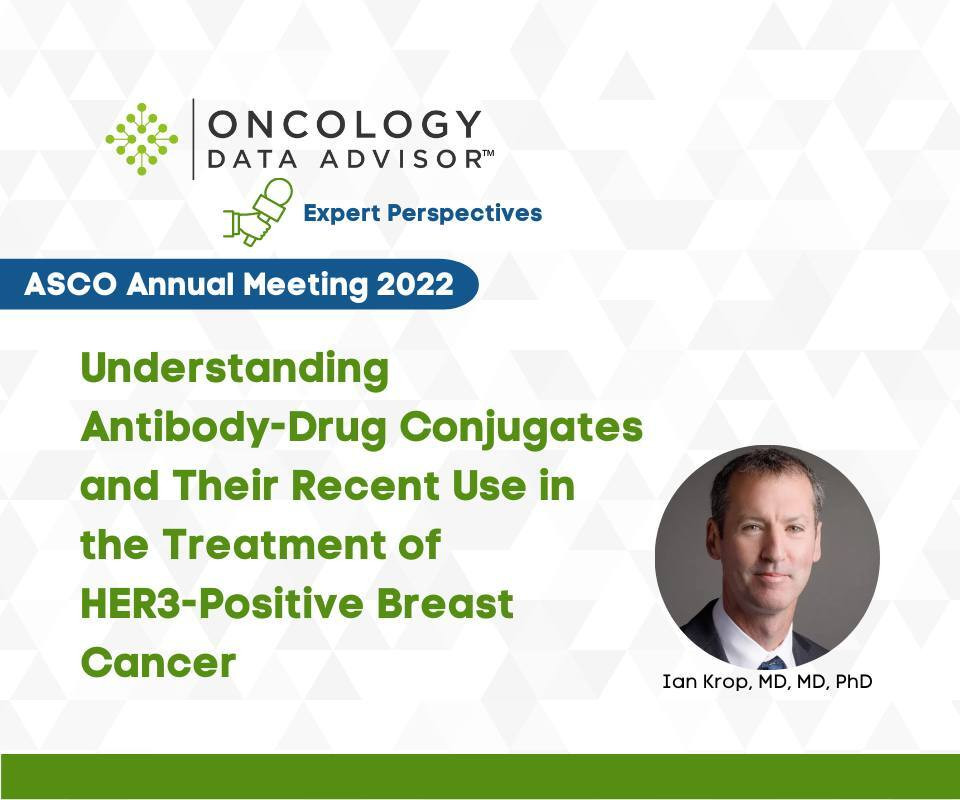 At the recent American Society of Clinical Oncology (ASCO) Annual Meeting, Ian Krop, Director of the Yale Cancer Center Clinical Trials Office, sat down with Oncology Data Advisor to discuss his research and the data he presented regarding the HER3-targeting antibody-drug conjugate patritumab deruxtecan (HER3-DXd) for treatment of metastatic breast cancer.

This podcast episode was recorded live at the 2022 ASCO Annual Meeting in Chicago by Oncology Data Advisor and ConveyMED.

Ian Krop, MD, PhD: I'm happy to be here. And just so you know, we all call it just HER3-DXd, which is a lot easier to say than patritumab deruxtecan.

Oncology Data Advisor: Thank you. Why is there so much excitement about antibody-drug conjugates for metastatic breast cancer at the ASCO 2022 annual meeting?

The idea of an antibody-drug conjugate is that you use a monoclonal antibody, which is something that's very specific for a certain target, and it can be any target on a cancer cell, to use the specificity of the monoclonal antibody for the target as a way to deliver a very potent chemotherapy directly to the cancer cell. So with the idea that if you can deliver the chemo right to the cancer cell, you can cut down some of the toxicity of the chemotherapy because it's not free to roam around and damage normal tissues."

Dr. Krop: Well, I think the excitement has preceded ASCO because this is a kind of therapy, that's really a class of therapy, that has really taken off. The idea of an antibody-drug conjugate is that you use a monoclonal antibody, which is something that's very specific for a certain target, and it can be any target on a cancer cell, to use the specificity of the monoclonal antibody for the target as a way to deliver a very potent chemotherapy directly to the cancer cell. So with the idea that if you can deliver the chemo right to the cancer cell, you can cut down some of the toxicity of the chemotherapy because it's not free to roam around and damage normal tissues. The idea of an antibody-drug conjugate is one that's been around for a long time, but over the last seven or ten years, we started to see more and more of these. And then in the last few years, there's been a second generation of these drugs that have really proven more effective probably than any other type of chemotherapy-based treatment.

Oncology Data Advisor: These are generally used in the later-line setting. Do you think there's any chance that they could be moved up in the treatment pattern for breast cancer?

Dr. Krop: Well, I think that's a great question and certainly yes. In breast cancer, well I mean, in most cancers, we start out developing drugs in patients with advanced disease, and that was first done with the first antibody-drug conjugate in breast cancer, which was called T-DM1 or trastuzumab emtansine. T-DM1 showed efficacy in the advanced disease setting for HER2-positive patients, and then there was a study that actually looked in the early disease population. These were patients who were high-risk because they had had neoadjuvant treatment and did not have a complete response. They were randomized to just getting trastuzumab, which was a standard at the time, or switching to this antibody-drug conjugate in these early-stage patients and by switching to T-DM1, you basically cut their recurrence risk by half.

Oncology Data Advisor: In your trial, the drug targeted HER3—why is this an attractive target?

Dr. Krop: Yeah, perfect question. HER3 is something that we've known for a long time is over-expressed in a substantial fraction of breast cancer; it is probably in at least half, if not more. When cancers have too much HER3, they have a bad prognosis. And so those are kind of red flags to us, that this is a potential good therapeutic target. But in the past, even though there have been attempts at using HER3-targeted drugs, they really hadn't worked, but they weren't antibody-drug conjugates. So, this is kind of a way to take advantage of the effectiveness and potency of antibody-drug conjugate and direct it against HER3.

Oncology Data Advisor: What did your study show about the clinical activity of HER3-DXd.

Dr. Krop: We looked at all major subtypes, we had patients with hormone receptor positive, HER2-negative cancers, triple negative cancers, as well as HER2-positive cancers. Importantly, these were heavily pretreated patients, so this was an early phase, a phase 1/2 trial. And those tend to attract patients who've had multiple lines of therapy, and that's what happened here. The hormone receptor positive patients had, on average, six prior lines of therapy, the triple negative patients had two prior lines, and the HER2 positives had almost six prior lines.

These were patients who had been on a lot of therapy that had stopped working. And yet, we saw pretty substantial clinical activity. So, the response rate was about 30% in the estrogen receptor (ER)-positive patients. It was over 20% in the triple negatives and over 40% in the HER2-positives. And what was nice, was not only did it work in a good fraction of patients, but it tended to work for a decent amount of time. On average, it was working six to eight months for these patients. I think those are things that we really look for in a drug, that it works in a healthy fraction of the patients, and it works for a non-trivial amount of time. And that's what we saw here.

Oncology Data Advisor: And it also had a very manageable safety profile, correct?

Dr. Krop: I think overall that's correct. I mean, only about 10% of people had to stop the therapy because of side effects. About 10 to 20% just had to dose reduce because of side effects. And those are numbers that I think most of us would think are pretty manageable. The most common side effects were mild gastrointestinal things like nausea and vomiting that were very manageable. You do get myelosuppression, so people did have drops in their platelet counts, in their neutrophils, but those were also very manageable. You just had to hold the drug or dose reduce, and never had to stop a drug because of those kinds of toxicities.

Now, the one thing that I always want to make sure people remember is that there is pneumonitis or interstitial lung disease (ILD) seen with this as well as a lot of the other antibody-drug conjugates. In this trial, it's about a little bit more than 6% of people had it. Most of them were mild, but the trial did have one patient, so about less than 1%, but one patient died of pneumonitis. So, it's definitely something that we always have to pay attention to when we're using these antibody-drug conjugates.

Oncology Data Advisor: Do you have any strategies for monitoring and management of the ILD after doing the trial?

Dr. Krop: I think what we've learned now that we've been using particularly patritumab deruxtecan a lot in the clinic, that it's something that we have to monitor as physicians and nurses so that if the patient has respiratory complaints, typically shortness of breath or cough, that we think about this. We also need to look on when patients have their staging computed tomography (CT) scans, we have to make sure that they're not developing any signs of pneumonitis, which typically are ground glass opacities.

Importantly, we have to tell the patients about this, so that they know that if they're at home and they're starting to develop cough and shortness of breath, it may be COVID, but it also could be this. Or it could be a cold, and they need to let the doctors know. Because the way that people get into trouble with this is that the pneumonitis isn't recognized early on. And so they need to tell us, so we can get them evaluated, and we need to think about it. The whole care team needs to think about it, so if the patient's having symptoms or radiographic signs, that we work it up. And that means getting an evaluation oftentimes by a pulmonologist, getting a high resolution CT scan, and often putting them on steroids which tends to work very well.

Oncology Data Advisor: What are the future directions?

Dr. Krop: I think the data are encouraging for the reasons we talked about, but this is a small study—this is a phase 1/2 study. I think we need to do somewhat larger studies to confirm what we're seeing—that this level of activity is not a fluke, which I don't think it is. And then if that's confirmed, then doing a registration, a large phase 3 trial to really prove that this is better than standard of care. But certainly, if the data continue to look the way they do, then I think that's very likely, and this would be great to have as another treatment, particularly for the ER-positive patients where we often run out of options.

Dr. Krop: Sure. My pleasure.

Thank you for listening to this podcast recorded live at the 2022 ASCO annual meeting by Oncology Data Advisor and ConveyMED. For more expert perspectives on the latest in cancer research and treatment, be sure to subscribe to the podcast at conveymed.io and oncdata.com. Don't forget to follow us on social media for news, exclusive interviews, and more.

Ian Krop, MD, PhD, is the Chief Clinical Research Officer, Associate Cancer Center Director for Clinical Research, and the Director of the Clinical Trials Office at the Yale Cancer Center. He is an international leader, providing research and novel findings regarding the treatment of breast cancer. Dr. Krop serves nationally as the Chief Scientific Officer for the Translational Breast Cancer Research Consortium, the Co-Vice Chair for Correlative Science for the Alliance for Clinical Trials in Oncology, as well as serving on the NCI Breast Cancer Steering Committee, the Data Monitoring Committee for ECOG/ACRIN, Data and the Safety Monitoring Boards for multiple phase III trials.