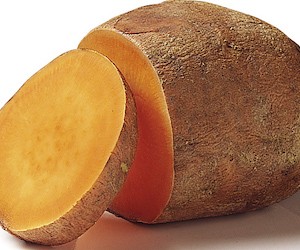 Sweet potato, high in vitamin A.

According to a recent study, an increased consumption of vitamin A is associated with a decreased risk of squamous cell carcinoma.

The second most common form of skin cancer, squamous cell carcinoma arises when an uncontrolled growth occurs in the outermost layer of the skin, called the epidermis. Sun exposure is a huge risk factor of squamous cell carcinoma. This cancer appears as persistent, thick, rough, scaly patches that can bleed.

For this study, published in Journal of the American Medical Association Dermatology, the researchers analyzed more than 26 years of follow-up data on 48,400 men and 75,170 women living in the United States. Data were derived from two long-term observational studies: Nurses' Health Study, conducted from 1984 to 2012 and Health Professionals Follow-up Study, conducted from 1986 to 2012. A total of 3,978 cases of squamous cell carcinoma among both the men and women were reported in the study. The diet of all participants was analyzed, which revealed that those who ate diets high in vitamin A had a 17% lower risk of developing squamous cell carcinoma. Participants who ate foods containing retinol and carotenoids also reduced their risk of skin cancer, but not as much as by consuming vitamin A.

Vitamin A contains retinoids, bioactive materials that maintain epithelial maturation and differentiation. Man-made retinoids are used to prevent skin cancer in populations who are at high risk; however, synthetic retinoids can have potential side effects.

"Our study provides another reason to eat lots of fruits and vegetables as part of a healthy diet," commented one of the study authors, Eunyoung Cho, ScD, Associate Professor of Dermatology and Epidemiology at Brown University. "Skin cancer, including squamous cell carcinoma, is hard to prevent, but this study suggests that eating a healthy diet rich in vitamin A may be a way to reduce your risk, in addition to wearing sunscreen and reducing sun exposure."